Young Maharashtra batsman Ruturaj Gaikwad has said that he will look to bring his adaptability to the fore during India’s upcoming tour of Sri Lanka. Gaikwad is among the new faces in the Indian team for the tour of Sri Lanka. A limited-overs specialist squad will face the Lankans in three ODIs and three T20Is from July 13 and July 25. Gaikwad has impressed for Chennai Super Kings (CSK) in recent IPL seasons.

Speaking to PTI, Gaikwad said adaptability is one his strengths as a batsman. He stated, "Be it in an attacking manner or be it playing according to situation, taking some time or making sure your team crosses the line, the way I adapt to both situations, that is what I think my strength is more often."

The right-hander also expressed excitement at reconnecting with the great Rahul Dravid, who had coached the cricketer was he was part of the India A squad. Gaikwad said about the Lanka tour and Dravid, "The opportunities would be limited but I'm just looking forward to learn from this journey as much as I can. There are experienced players in the group and obviously once again I will get a chance to reconnect with Rahul Sir," he said. 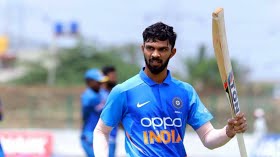 "The last India A tour happened one and half years ago, so again, there is a chance to regroup with him (Rahul Dravid) have a chat about the game, so there is lot more than just performance or scorecard.”

"Obviously if I get opportunity, just hoping that I can give my best and wish to win a game for India. One of my biggest goals is to get a win for the Indian team or my country," he added.

The 24-year-old also admitted that playing alongside the likes of Faf du Plessis and Mahendra Singh Dhoni in CSK has been a big learning curve for him. Gaikwad explained, "I think with Mahi Bhai, obviously whatever he speaks it is always eye-catching and I had heard that he spoke about me in the post-match presentation and all, I don't talk much with him, he knows that I'm a quiet and shy guy."