Royal Challengers Bangalore collecting their third win in four matches after comprehensively beating the defending Champs Kolkata Knight Riders by 8 wickets. Chasing 155 for a win on what is good batting pitch at the Chinnaswamy Stadium,...

Royal Challengers Bangalore collecting their third win in four matches after comprehensively beating the defending Champs Kolkata Knight Riders by 8 wickets. Chasing 155 for a win on what is good batting pitch at the Chinnaswamy Stadium, RCB eased to victory with 15 balls to spare. With Chris Gayle deciding to stay for sometime in the middle, KKR had no chance but to watch the left hander demolish their bowling attack.

Gayle whacked as many as 9 sixes along with 4 fours in a destructive knock of 85* from 50 balls. The Jamaican got good support from Skipper Virat Kohli (35 from 27 balls with 4 fours and 2 sixes) and AB de Villiers (22* from 22 balls with 2 fours and a six) to wrap up the match without any fuss. 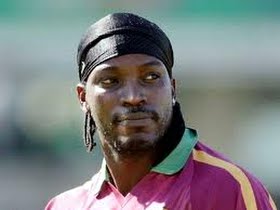 Earlier in the evening, it was a good bowling efforts led by RP Singh (4-0-27-3) that saw the hosts restrict KKR to 154 for 8. For KKR, Skipper Gautam Gambhir looked aggressive with his 59 from 46 balls (with 7 fours and a six) but it wasn’t a knock that would bat the opposition out of the game. Yusuf Pathan threatened to get going with a destructive innings which was cut short to a 17-ball 27.

While it was an easy victory for RCB, the contest this evening saw a verbal battle between two Delhi boys Virat Kohli and Gautam Gambhir after the former was dismissed. Another Delhi boy Rajat Bhatia separated the two Skippers to diffuse the situation.

Toss and Teams: RCB have won the toss and asked KKR to bat first at the M Chinnaswamy Stadium in Bengaluru. The homeside have made one change with KL Rahul, a batsman replacing Murali Kartik. KKR have made three changes with Pradeep Sangwan, Ryan McLaren and Balaji replacing LR Shukla, Lee and Shami Ahmed.