India went into the first T20I against Bangladesh as hot favorites having never lost a T20I to their Asian opponents. However, Bangladesh

India went into the first T20I against Bangladesh as hot favorites having never lost a T20I to their Asian opponents. However, Bangladesh, despite all the pre-match troubles, put up a highly polished effort to open their account against Bangladesh, in the Delhi T20I. Chasing a moderate target of 149 set by the hosts, Bangladesh got home in the last over by seven wickets.

India actually seemed to have things under control going into the last three overs. However, Bangladesh's ploy to keep wickets in hand proved to be a big difference. With the match tightly poised, Krunal Pandya dropped Mushfiqur Rahim at the fence off Yuzvendra Chahal. The ball went to the boundary and was possibly a sign of things to come.

Bangladesh went into the last two overs needing 22 to win. The calm and collected Rahim whoever smashed the inexperienced Khaleel Ahmed for four boundaries in a row to completely shift the momentum. Skipper Mahmudullah then slammed debutant Shivam Dube for a six in the last over to seal an emphatic victory for the visitors. Rahim's unbeaten 60 from 43 separated the teams in the end. 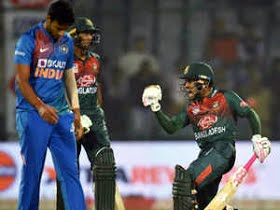 India yet again got it wrong with the DRS. They could have sent back Rahim in the 10th overs bowled by Chahal, but failed to take the review, and missed the big lbw chance. At the post-match presentation, India captain Rohit Sharma admitted, "The reviews were a mistake from our side, not to talk about it at least, and the first ball he played on the back foot, we thought it was going down leg, and the next one on the front foot, but we forgot how short he is." India did take the review against Soumya Sarkar for an edge, but the replay showed no spike

While Rahim stood out for his half-century, Bangladesh was also aided by good cameos from debutant Mohammad Naim (26) and Sarkar (39). The inexperience of the Indian bowling, Ahmed in particular, and India’s conservative approach with the ball cost them dearly.

India's batting effort on the day was also disappointing. After India lost skipper Rohit early, and Lokesh Rahul(15) and Shreyas Iyer (22) could not convert their starts, Shikhar Dhawan was just beginning to get into his groove. After struggling to get the big hits for the most part of his innings, the left-hander blasted Mahmudullah for a six through midwicket in the 15th over. However, a mix-up saw Rishabh Pant sending the opener back, and he was found short of the crease. Dhawan departed for an unfulfilled 41 from 42 balls.

Pandya and Washington Sundar got a couple of big hits towards the end. But, it was still not enough against an inspired Bangladesh outfit.