South Africa Score is 191 for 7 on Day 1 in the 1st Test Match at the University Oval in Dunedin against New Zealand, March 7, 2012

New Zealand have put South Africa on the mat at 191 for 7 on what was a rain-curtailed first day’s play at the University Oval in Dunedin in the First Test Match. Just the 59 overs were possible throughout the day as the match began only after the lunch break because of rain and wet outfield.

Electing to bowl first after winning the toss, New Zealand were kept at bay as South Africa progressed steadily to 86 for 1 in 26 overs by Tea. Alviro Petersen (11) was the only one to be dismissed after Trent Boult hit his pad for an lbw which was ruled out only through a referral.

After Tea, South Africa lost three wickets suddenly as Chris Martin reduced the visitors from 86 for 1 to 90 for 4! In just the first over of the post Tea session, Martin got the wicket of South Africa Skipper Graeme Smith (53 from 74 balls with 6 fours) who was caught driving to short covers. 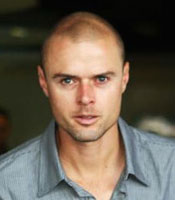 In the 29th over, Chris Martin took two wickets in two balls but missed out on a hat-trick. Martin first had Jacques Kallis (0) edging a rising length delivery off the backfoot which was brilliantly caught by the diving Ross Taylor in the slips. With his very next ball, Martin hit the backpad of AB de Villiers (0) who opened up in a backfoot defence shuffling far too across his stumps.

Hashim Amla with a steady partnership with Jacques Rudolph defied the Kiwis for sometime. Amla added 66 runs for the 5th wicket before he got caught at slip top edging a cut off a delivery from Daniel Vettori that bounced. Hashim Amla made 62 (from 102 balls with 8 fours and a six).

By the close of play, the Black Caps added two more wickets to sustain the pressure on the Proteas. Wicket Keeper Mark Boucher (4) trying to steal a single for Rudolph was run out while Dale Steyn was caught in the slips off Doug Bracewell’s bowling.

The hosts New Zealand have given Test Debuts to Rob Nicol and 32-year-old Wicket Keeper Kruger van Wyk who comes in because of the injury to BJ Watling.