DD Vs SRH: Lack of runs cost Delhi the match

Although Delhi Daredevils have perennially underperformed in the Indian Premier League, they wouldn’t have expected to remain without any points after four games when much weaker sides have got their names on the scoring table.

Although Delhi Daredevils have perennially underperformed in the Indian Premier League, they wouldn’t have expected to remain without any points after four games when much weaker sides have got their names on the scoring table. Having said that, they themselves have been responsible for their downfall so far. In all the four matches, they have been disappointing with the bat and ball as well as in the field, as a result of which much feebler sides have got the better of them. The case was the same in the match against Sunrisers Hyderabad on Friday at the Feroz Shah Kotla stadium in Delhi.

Batting first, the hosts needed a confident start from their openers, but it just did not come, and Delhi could never recover from the poor start. David Warner was expected to make some quick runs. Instead, he was frustrated in the very first over and fell for a duck. Credit must be given to Dale Steyn for the manner in which he stifled Warner and forced him to give his wicket away. Although the other bowlers cashed in later, it was Steyn’s choking overs that gave them the freedom to bowl the manner in which they did. 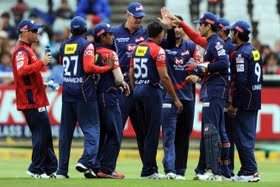 Ishant Sharma’s two strikes were particularly important. Mahela Jayawardene and Virender Sehwag were just beginning to get their eye in, and could have aided Delhi in putting up a competitive score. Instead, they fell to Sharma off consecutive deliveries having hit a couple of big strokes. Considering the inexperience in middle and lower order, the experienced duo’s loss proved irreparable. The quick losses of Johan Botha and Manprit Juneja soon after Jayawardene and Sehwag only made matters worse for Delhi. Not surprisingly, their run-rate kept falling steadily along with the wickets.

There was a glimmer for hope for Delhi when Irfan Pathan and wicket-keeper Kedar Jadhav featured in a rebuilding partnership. By that time though the major damage had already been done, and the only thing the Pathan-Jadhav alliance did was give some semblance of respectability to the score. Even when the partnership was building, the Sunrises continued to bowl well as an overall outfit. Leggie Amit Mishra was particularly brilliant. Although he claimed only one wicket, Mishra conceded less than four runs an over during his spell. Thisara Perera and Anand Ranjan were also handy with the ball, grabbing a couple of crucial scalps.

In spite of defending a modest score, Delhi came out all guns blazing with the ball. There were encouraging signs early on when Akshath Reddy was run out by Shahbaz Nadeem, but Parthiv Patel and skipper Kumar Sangakkara featured in a good rebuilding partnership to put the chase right back on track. Even though they dell much before the target was achieved, and Morne Morkel went on to bowl an incisive spell, the lack of runs in Delhi’s kitty proved to be their undoing. A couple of big hits from Ashish Reddy and Amit Mishra were enough to see them home.

Turning point of the game: The dismissals of Jayawardene and Sehwag off consecutive deliveries left Delhi reeling at 26 for 3. They never recovered.