Cricwaves provide rates the performance of players from Team India on a scale of 1-10 in Cricket World cup 2015.

Team India got knocked out of the 2015 World Cup following their 95-run defeat in the semi-final against Australia at Sydney. Cricwaves rates the performance of players from Team India on a scale of 1-10.

Shikhar Dhawan (8/10): Rather surprisingly, the India opener was one of India’s most consistent performers in the World Cup. He finished with 390 runs in the series with two hundreds and a fifty. He was looking good in the semi-final as well, having raced to 45. But, his untimely dismissal cost India. 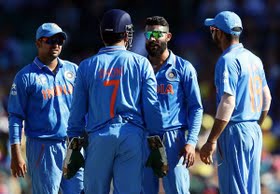 Rohit Sharma (5/10): The other India opener had a mixed tournament. He got a couple of fifties in the league round against the minnows, but failed against the bigger sides. He rose to the occasion and scored a hundred in the quarter-finals against Bangladesh, but disappointed in the semis. He finished the tournament with 315 runs.

Virat Kohli (4/10): He began with a hundred against Pakistan, but his tournament only went downhill after that. It all culminated with that poor pull shot against Australia in the semis, as he was dismissed for 1. Kohli finished with 304 runs in the series.

Ajinkya Rahane (3/10): He had a disappointing World Cup campaign. Except for the smashing 79 against South Africa, he did not do much. Both in the quarters and the semis, the pressure seemed to have gotten to him. Rahane managed a disappointing tally of 164 runs in the World Cup.

Suresh Raina (6/10): Batting in the middle order, Raina finished with an impressive tally of 277 runs. He began with a quick fifty against Pakistan, scored a century against Zimbabwe, and also chipped in with a crucial innings in the quarter-final against Bangladesh. However, he played a terrible shot against Australia under pressure in the semis.

MS Dhoni (6/10): The Indian skipper wasn’t at his best, yet managed to win a couple of games for India. He guided a tense chase against West Indies, partnered Raina when India were in trouble against Zimbabwe, and gave the Indian innings some respectability in the semis. However, the lethal Dhoni was missing, and that hurt India.

Ravindra Jadeja (1/10): He had an embarrassingly World Cup with only 41 runs in the entire campaign. With the ball, he claimed nine wickets at an economy rate of nearly 5. Clearly, a big disappointment. Jadeja might have played his last match for India for a while.

Umesh Yadav (7/10): He made a serious impression with his pace and aggression. Yadav finished the World Cup with 18 wickets, the most by an Indian in the tournament, at an economy of 4.97. He claimed four wickets in the semis, but was expensive.

Mohammed Shami (7/10): Like Yadav, Shami also impressed. He finished the tournament with 17 wickets, and was India’s leading wicket- taker until the semis, where he went wicketless. Shami’s pace was impressive, but he overused the short stuff towards the end.

Ravichandran Ashwin (8/10): Even as the pacers did most of the damage, Ashwin held his own. On surfaces not conducive to slow bowling, he kept the runs down, and got wickets as well. Ashwin ended the World Cup with 13 wickets at an economy of 4.48, highly credible returns.

Mohit Sharma (6/10): There was debate over his selection, but Sharma answered his critics doing a good job as the third bowler, with 13 wickets at an economy of 4.98. It was only in the semi-finals that his limitations were actually exposed.