It’s official: Sourav Ganguly to take over as CAB chief

Just days after the passing away of Jagmohan Dalmiya, speculation of former India captain Sourav Ganguly taking over the reins of Cricket Association of Bengal (CAB) have now been confirmed

Just days after the passing away of Jagmohan Dalmiya, speculation of former India captain Sourav Ganguly taking over the reins of Cricket Association of Bengal (CAB) have now been confirmed. West Bengal Chief Minister Mamata Banerjee has made the much-expected announcement that ‘Dada’, as he is fondly known, will actually take charge of CAB as its new president. The decision was taken after the West Bengal CM met Ganguly, the CAB joint-secretary and treasurer apart from Dalmiya’s son Abhishek. Ganguly had held a meeting with Banerjee a day before, on Wednesday, on the same. While Ganguly takes over as president, Dalmiya’s son Abhishek will become the joint-secretary. 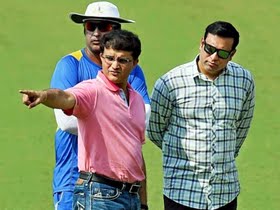 At 43, Ganguly will now become the youngest CAB president. Speaking to the press after the decision was made, Ganguly thanked his colleagues for getting an opportunity to serve CAB in the capacity of the president. Referring to the task at hand, Ganguly said, “It’s a big role, and I accept this challenge. I will do my best, whatever I can, for Bengal cricket. Ganguly refused to entertain any thoughts that the backing of CM Banerjee had helped him clinch the spot. At the same time, he welcomed Abhishek into the administrative fold. “He must have learnt from his father, and we are happy to have him in the fold.”

Talking to reporters after the decision was made, Banerjee told the media, “We are going through a big crisis at the moment following the unfortunate demise of Mr. Dalmiya. But, the fact is that someone has to head CAB. Dalmiya loved cricket very much. So it's important that the people close to him are actively involved. Banerjee further requested everyone to be together. “I want everyone to be united and take Jaguda's legacy forward,” she further added.

Apart from the post of the CAB chief, Dalmiya’s death has also led to a vacancy in BCCI’s top seat. There are many names in contention for the new BCCI chief, including that of Anurag Thakur, N Srinivasan, Sharad Pawar and Shashank Manohar. Interestingly, in a sudden turn of events, Pawar and Srinivasan had a meeting on Wednesday. The buzz going around is that Srinivasan is trying to convince Pawar to stand for the presidential race. This, in an endeavour to try and see to it that Anurag Thakur doesn’t end up getting the main post. All this though is mere speculation as of now.