A superb partnership of 96 runs between Virat Kohli and Skipper MS Dhoni saw India through in a tense run chase on the fourth day of the Bangalore Test. The pair carried India to a 5-wicket win to cleansweep the Test Series 2-0.

A superb partnership of 96 runs between Virat Kohli and Skipper MS Dhoni saw India through in a tense run chase on the fourth day of the Bangalore Test. The pair carried India to a 5-wicket win to cleansweep the Test Series 2-0. MS Dhoni with this victory has become the most successful Indian Captain at home with 14 wins surpassing the previous record he jointly held with Mohammad Azharuddin.

India was under huge pressure at 166 for 5 when MS Dhoni joined Virat Kohli. The two right handers showed good technique, patience and the ability to play the boundary shots whenever the opportunity was there. Kohli helped himself to an unbeaten 51 (from 82 balls with 9 fours) to go along with his first innings century to collect the Man of the Match award. 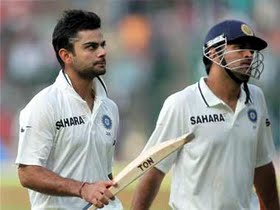 Dhoni played an outstanding knock as well keeping his cool with a 60-ball 48* (with 3 fours and 2 sixes).

The final session saw New Zealand come out of nowhere to get back into the match. Sachin Tendulkar departed early after play had resumed following a rain break. The veteran was bowled for the third time in this series with the frontfoot not getting fully forward and across to cover the stumps. This time he got out to Tim Southee in an attempted flick that saw the bat face closed and hitting his pad. Southee who had bowled with a scrambled seam had the ball brushing the pad and then crashing onto the middle stump of Tendulkar (27). This could well be Tendulkar’s last innings of his long career looking at the way he has been humbled by the young Kiwi fast bowlers not once but thrice!

Cheteshwar Pujara, who had an escape against Jeetan Patel thanks to a mistumping from Brendon McCullum early on, fell to the same bowler. Pujara was seemingly clueless against the variations of Jeetan Patel, and to one particular jumping off break, he got a big bat pad edge which was brilliantly caught by Daniel Flynn running backwards at shortleg. Pujara fell for 48 (from 104 balls with 7 fours) while leaving India at 158 for 4.

Jeetan Patel was on the top of the world and next man in Suresh Raina was looking too nervy against him. Raina (0 from 10 balls) trying to hit out of trouble did the most foolish thing on earth by charging down the track for a wild hoick to the same bowler but only to have his middle stump cleaned up to open the door for a Kiwi victory at 166 for 5! Luckily, India had two mature heads in Virat Kohli and MS Dhoni to close the door on the Kiwis to finish the match off in style. While Kohli got the Man of the Match award, India’s new all-rounder R Ashwin collected the Man of the Series award for taking a bagful of wickets.

Update at Tea on Day 4: An early Tea was taken at the M Chinnaswamy Stadium because of a steady drizzle. India before the rain break were looking comfortable towards a victory at 147 for 2 in 32.5 overs. Cheteshwar Pujara is doing well with a busy 41 (from 77 balls with 6 fours) while Sachin Tendulkar is easing out into his own self playing some thunderous backfoot shots to move onto 23* (from 30 balls with 4 fours).

The hosts need 114 more runs to win with 8 wickets in hand. Pujara and Tendulkar have steadied the ship so far with an unbroken stand of 64 at a healthy run rate of 4.04 for the 3rd wicket.

Update at Lunch on Day 4: After a ferocious start from the Indian openers, the Bangalore Test is once again in the balance as the Kiwis fought their way back with two wickets. India at lunch need 173 more runs to win with 8 wickets in hand.

India have made rapid strides chasing the target of 261 with a total of 88 for 2 in just 20 overs. Virender Sehwag and Gautam Gambhir looked to be in a hurry as they threatened to take the game away from the Kiwis. In the 12th over their stand was broken by the innocuous off spin of Jeetan Patel. Sehwag launched Patel over long off for a six and then played a back cut for a boundary. Still not content with it, Sehwag (38 from 33 balls with 7 fours) jumped down the track for another six but only to miss a straighter from Patel which hit the off stump.

After Sehwag’s exit, the Kiwis dried down the runs significantly and an anxious Gautam Gambhir feeling the heat lost his wicket playing a nothing cut shot without moving his feet to edge Trent Boult to first slip. Gambhir had started his innings in style hitting some classy fours but towards end got bogged down to end up with 34 from 58 balls (with 7 fours). By lunch, India have got the young Cheteshwar Pujara (10*) battling along with a nervous Sachin Tendulkar (0* from 7 balls), who survived a close lbw shout off Boult.

Build Up to Day 4: This could be the final day of the Test Match in Bangalore with India likely to chase a target of 250+ on a pitch that has started to produce uneven bounce. New Zealand will resume Day 4 at 232 for 9 and would be hoping to add 20 more runs to their lead.

It will all boil down as to how the Indian top order deals against the new ball attack from the Kiwis. The conditions in Bangalore are overcast much to the delight of the Kiwi pacers. The cracks on the pitch are a lot wider now, and the odd ball is either staying too low or kicking up wickedly. There are also patches of green around the good length region to assist some lateral movement for the seamers.

Having said all this, the Kiwis have the runs on the board and the pressure will be on India to get them through some quality batting.