India vs England: Moeen Ali has the ability to win games with bat and ball, says Joe Root

England Test captain Joe Root has asserted that all-rounder Moeen Ali has the ability to win matches for the team with both the bat and ball in hand. Moeen has been brought into the England team for the second Test against India at Lord’s. The cricketer has an excellent record against India and will look to add the same. With Stuart Broad uncertain for the second Test, which starts on Thursday, there is a fair chance of Moeen getting into the playing XI.

Speaking at a virtual press conference on Tuesday, Root said in praise of Moeen, "Just to go out there and be Moeen Ali. He has the ability to go out there and win games with bat and ball, he's proven that. He plays his best cricket when he is enjoying it and he's full of confidence - it certainly looks that way at the moment, the way he has taken to the Hundred, the way he has led Birmingham Phoenix.”

Root added that he would be happy to give Moeen a huge amount of responsibility if he does play because he responds extremely well to that. The England captain further said, “He is a leader within the dressing room, a great personality, he drags people with him on the field and in the dressing room, so it will be great to have him back around," he added. 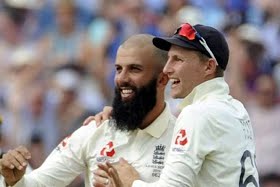 England’s batting struggled in the first Test in Nottingham with Root top-scoring in both innings with a fifty and a hundred. The inclusion of Moeen could help reduce some of England’s woes and bring in some stability in the batting. Speaking about the all-rounder, Root further said, "We've tried to manage things as best we can over a period of time and I've always been a huge fan of Mo. I think he's a wonderful cricketer across the formats, I think he's a great ambassador for the game, and it's wonderful to see him back in the Test arena, being back in a Test squad.”

"It was a brilliant performance he put in in Chennai and if he gets an opportunity, he'll be desperate to impress and show everyone how good he is in Test cricket as well as white-ball cricket. He's certainly a big contender. We haven't been to the ground yet and we'll look at conditions and weigh things up but he's in a great position to play," he added.

The first Test between India and England ended in a draw after rain washed out the last day’s play in Nottingham.