For Australians, the Hobart Test has been all about players seizing the opportunity to try and cement their places in the side for the upcoming games

For Australians, the Hobart Test has been all about players seizing the opportunity to try and cement their places in the side for the upcoming games. Adam Voges and Shaun Marsh did so with big, scintillating tons on the opening day, Josh Hazlewood ensured that he remained in content for a playing spot in the eleven even when Mitchell Starc came back, possibly piping Peter Siddle. On day three, it was all about James Pattinson proving his credentials of being a fast bowler. His five-for was enough proof of how dangerous he can be when he is fit.

There was plenty for Aussies to cheer about on the third, and what proved to be the final day of the Hobart Test. Hazlewood bowled very well to clean up the tail, and Siddle, although he did not have a lot of wickets to show, claimed the massive scalp of Darren Bravo, the only West Indian to reach three figures in the match. The only partnership of note for the Windies in the match came when Bravo and Kemar Roach were at the crease. But, the stand was broken early on day three, and from thereon it was all easy for the Aussies. 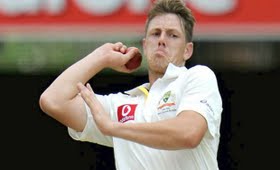 In the second innings, Pattinson was at his very best, destroying the fragile West Indies with his raw pace. Rajendra Chandrika was forced to edge a quick delivery to slip, which gave him his third duck in four innings. First-innings centurion Bravo then chopped one on. Marlon Samuels’ atrocious run continued as he saw one take the shoulder of the bat and was caught in the gully region. Pattinson again bowled a deserving wicket-taking delivery, albeit one that stayed low, to send back Jermaine Blackwood, the talented batsman finishing with a pair.

West Indies’ second innings was a nothing short of a repeat of the first. In fact, it only got worse. If Bravo’s hundred took West Indies past 200 in the first innings, in the second, they could not even reach 150 in spite of opener Kraigg Brathwaite’s 94. Just like Bravo in the first innings, Brathwaite held one end up for the West Indies. But, he received no support at all from the other end. The next highest scoring in the innings was by skipper Jason Holder, who made 17. Only three batsmen got into double figures in the match; that says a lot.

In the end, Australia proved far superior to West Indies, as rightly predicted in the match preview.