Guess who is impressed by Pakistan's turnaround in the Champions Trophy

India captain Virat Kohli praised Pakistan’s brilliant turnaround in the Champions Trophy. Pakistan were thrashed by India in their tournament opener, but they fought back to get the better of South Africa, Sri Lanka and England to book their place in the final.

"I´ve been very impressed. The turnaround has been magnificent. Obviously if you reach the finals you have to play some good cricket, and credit to them (Pakistan), they´ve turned things around for themselves really well,” Kohli admitted.

"They´ve beaten sides that looked really strong against them, but the belief they showed on the field, the way they played together as a team. You know, regardless of who you play in the finals, it´s always going to be challenging because once you start thinking that it´s a big game, then your mindset changes," he added. 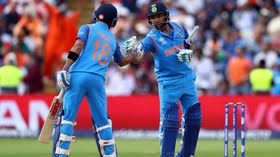 "What we are going to try to do is repeat the similar sort of cricket that we have played so far, knowing the strengths and weaknesses they have,” Kohli further said.

One of the heroes in India's win against Bangladesh was Kedar Jadhav, who claimed two big wickets of Tamim Iqbal (70) and Mushfiqur Rahim (61).

"Before this game I had six wickets and most of them are pure batsmen...it´s not like I have been getting out bowlers," Jadhav said on his performance.

On MS Dhoni's role behind his success, Jadhav admitted, "He provides me with all the knowledge that he has. Even while I am bowling he is looking at me and from his eyes only I can tell what he wants me to bowl.”