Zimbabwe’s 37-year-old veteran left-arm spinner Ray Price announced his retirement from international cricket on Sunday, ending a career that began 13 years back. Although Price was never rated among the best in the world at his peak, he was a valuable spinner for Zimbabwe, and their most consistent bowler in the post-Heath Streak era. It was unfortunate that Price had to miss out on a lot of international cricket during the career owing to the political unrest in the country, with the ICC even keeping them out of Test cricket for a few years. Still, Price ended with reasonablecareer figures. Here’s a deeper analysis of his career. 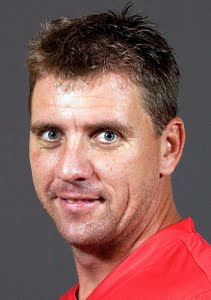 Overall figures: Price played 22 Tests during his career, in which he 80 wickets averaging a reasonable 36. Price grabbed five four-wicket hauls, five five-wicket hauls and once he picked up 10 wickets in a Test. His best bowling figures in an innings were 6/73 and his best match figures were 10/161. In one-dayers, he did even better, picking up exactly 100 wickets in 102 matches. While he never picked up a five-for, he had an extremely impressive economy rate of just under 4. His best bowling figures in the format were 4/22. Even in the 16 T20s he played, Price impressed grabbing 13 wickets at an average of under 30 and a strike rate of 28.

Detailed Test analysis: In Tests, his most impressive performance was against Bangladesh, against whom he grabbed 17 wickets in four Tests at an average of 22. Strikingly, he did very well against West Indies as well, claiming 24 wickets against them in five Tests, averaging 29 with a best of 6/73. His performances were decent against India and Pakistan as well against whom he grabbed 10 and 12 wickets respectively averaging in the low 30s. It was against the other top teams that he struggled. Against Australia, he grabbed only six wickets averaging 62, versus England he picked up only two wickets averaging 75. Against New Zealand and South Africa he averaged 51 and 78, managing to grab four and five wickets respectively.

Detailed ODI analysis: In his one-day career as well, Price tasted most success against Bangladesh. He played 25 matches against the Asian opponent, and picked up 35 wickets at an average of 25. Against the Kenyans as well, the left-arm spinner performed exceedingly well, picking up 20 wickets in 13 matches while averaging 21. He had good figures against South Africa as well although he featured in only a few games –seven wickets in five matches averaging 29. Against the other big teams he struggled. Versus the Australians he averaged well over 100, against England 47, against India 70, against New Zealand 113, against Pakistan and Sri Lanka close to 40 and against West Indies 68.

Though Price’s overall numbers would pale in comparison to some of the bigger names in the sport, when it came to Zimbabwean cricket, he was one of their stalwarts.