Veteran pacer Mohammed Shami has been named as Jasprit Bumrah’s replacement in Team India’s ICC Men’s T20 World Cup 2022 squad. The same was announced by the BCCI via an official release.

The Indian cricket board’s statement read, "The All-India Senior Selection Committee has named Mohammed Shami as Jasprit Bumrah’s replacement in India’s ICC Men’s T20 World Cup squad. Shami has reached Australia and will link up with the squad in Brisbane ahead of the warm-up matches.”

On Friday, October 14, Shami posted pictures of him reaching Brisbane ahead of the T20 World Cup, which will be played from October 16 to November 13. Meanwhile, all-rounder Shardul Thakur and pacer Mohammed Siraj have been added as standby players to the extended T20 World Cup squad. 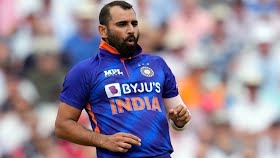 Siraj replaces Shami, who was earlier part of the standby list, while Thakur comes in since Deepak Chahar too has been ruled out of the T20 World Cup due to a back injury. The announcement of Bumrah’s replacement was delayed as Shami had to prove his fitness at the National Cricket Academy (NCA) in Bengaluru. He was ruled out of home T20I series against Australia and South Africa after testing positive for COVID-19.