In yet another proof of no score being safe in one-day cricket, England easily chased down a target of 350 set by New Zealand at Trent Bridge in the fourth ODI to level the series. Skipper Eoin Morgan and Joe Root hit tons in what turned out to be England's highest ever chase in the the one-day format,

In yet another proof of no score being safe in one-day cricket, England easily chased down a target of 350 set by New Zealand at Trent Bridge in the fourth ODI to level the series. Skipper Eoin Morgan and Joe Root hit tons in what turned out to be England's highest ever chase in the the one-day format, and yet another horrendous day for bowlers from both sides. New Zealand crossed 300 for the third consecutive time in the series thanks to Kane Williamson's 90 and half-centuries from Martin Guptill and Grant Elliott. Mitchell Santner's whirlwind cameo took them closer to 350, but against the new England, it wasn't enough. 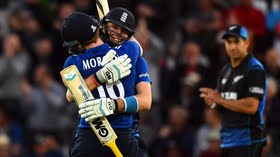 The chase began in attractive fashion with openers Alex Hales and Jason Ray adding 100 for the opening wicket in under 11 overs, Hales being the more aggressive of the two. And, after the openers were dismissed close to each other, Morgan and Root took over. The skipper took up the responsibility of keeping up with the run rate, constantly acing the required rate by finding the boundaries. Root, on the other hand, was happy to turn over the strike and watch his captain wreak havoc, that was of course when he himself wasn't hitting boundaries. The partnership took England to within 41 runs of a historic win, when Morgan fell. In the end though, they won with six overs to spare.

England's comprehensive seven-wicket win was the fourth highest chase ever, and only the third instance of them chasing down a score of over 300. This series has been a true indication of England's coming of age, finally, as an ODI side. Putting behind the World Cup disaster, Morgan has began his stint in a fresh fashion, and his naturally aggressive approach has held the team together when it comes to batting. New Zealand did not give Morgan much freedom to play his favourite shots square of the wicket, but the English skipper brought out his other range of strokes by driving well.

Bowling is definitely a concern for both sides, but more so for the Kiwis as compared to England. They are clearly missing their services of their World Cup hero Trent Boult. Without him, Tim Southee has been half as effective while Mitchell McClenaghan has learnt how different IPL is from one-day cricket. Ben Wheeler and Matt Henry too proved completely ineffective in the wake of England's onslaught. Even the part-timers in Williamson, who has been effective before, could not make much of an impression. While it is true that the series hasn't been kind of bowlers, New Zealand somehow need to find a way to reduce the damage.

England's easy win means that the final game at Chester-le-Street becomes a decider. It did not look that way when New Zealand raked up 349 batting first. McCullum and Guptill once again got the side off to a smashing start, before Williamson took charge with a composed 90, which came off only 70 balls, in the process completing 3000 ODI runs. After Ross Taylor, who featured in another 100-run stand with Williamson was trapped lbw by Steven Finn there was a lull. But, Santner hit four sixes in Adil Rashid's penultimate over to bring Kiwis back on track. England though were not going to die wondering.