Sachin Tendulkar scored an unbeaten 71 to steer India safely to 182 for 3 in reply to Australia’s 380. The little master got able support from Cheteshwar Pujara (44) and Kohli (50*) to take the initiative away from the Aussies.

Sachin Tendulkar scored an unbeaten 71 to steer India safely to 182 for 3 in reply to Australia’s 380. The little master got able support from Cheteshwar Pujara (44) and Kohli (50*) to take the initiative away from the Aussies. It has been a flawless innings from Tendulkar, a knock which should silence his critics. The little master moved his feet fluently and looked absolutely top class against the fiery pace of the Australian attack. For the visitors, fast bowler James Pattinson took all the three wickets to fall in two spells of three overs each. Pattinson was sparingly used by Clarke perhaps because of his injury worries which helped India to recover.

India was going very well with Pujara and Tendulkar looking solid. However, against run of play, Pujara was bowled by Pattinson by an innocuous short of length delivery that jagged back and stayed low to surprise the batsman. Pujara scored 44 (from 74 balls with 6 fours) in a 3rd wicket stand of 93 with Tendulkar. After Pujara’s exit, young Virat Kohli showed plenty of application to steer India to 182 for 3 in 52 overs by the close of play. Kohli stroked his way to a handsome 50* (from 84 balls with 7 fours). Tendulkar at the other end was holding things together with a masterful knock of 71* (from 128 balls with 6 fours).

Update at Tea: James Pattinson rocked India removing the opening batsmen Murali Vijay and Virender Sehwag early with the new ball before the pair of Pujara and Tendulkar steadied the ship for the hosts. Murali Vijay was done in for pace, a yorker at 150 kmph which he dragged onto the leg stump in an attempted cover drive. Virender Sehwag batting for the first time wearing spectacles was unlucky as his backfoot defence off Pattinson rolled onto the stumps to dislodge the leg stump bail. 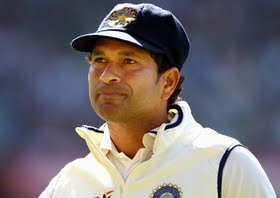 There was immense pressure on India when Tendulkar joined Pujara at 12 for 2 in the 6th over. Tendulkar was very assertive with his footwork and seemed to have all the time in the world to tackle the speedsters. Australia missed out a trick by resting Pattinson after a spell of just three overs. The other bowlers weren’t as testing as Pattinson was and the pair of Tendulkar (38*) and Pujara (33*) easily settled down to take India to 84 for 2 in 22 overs by Lunch.

Update at Lunch: India worked extremely hard to bowl out Australia for 380 this morning with the visitors’ innings coming to an end 10 minutes after the scheduled lunch break at 11:30. The hosts sent in as many as 38 overs in the morning session before taking the remaining three wickets which stretched the Australian total by 64 runs.

The first wicket to fall was that of Michael Clarke after a one and a half hour of waiting period. Clarke skipped down the track for a big shot but could only miscue a turning delivery from Jadeja to long off. Clarke finished with 130 (from 246 balls with 12 fours and a six) while eking out 54 runs for the 7th wicket. Peter Siddle (19 from 94 balls) fell next when he edged a straighter one from Harbhajan to slip.

India had to wait more than 10 overs before they got last man Nathan Lyon caught one handed by a diving Kohli at leg slip in an attempted sweep off Ashwin who finished the Australian innings with figures of 42-12-103-7.

Build Up to Day 2: The Chennai Test is evenly poised with Australia resuming the second day’s play at 316 for 7. For sure, Skipper Michael Clarke would be hoping the tail to wag along to help him stretch the Australian total. All eyes will be on how the Indian batsmen cope up against the Australian bowling. A good batting day from India should set the match in their favour on a pitch that is going to take more and more turn in the coming days.