There was a time when the Sri Lankan batting line-up in Tests had legendary names like Sanath Jayasuriya, Marvan Atapattu, Mahela Jayawardene and Kumar Sangakkara

There was a time when the Sri Lankan batting line-up in Tests had legendary names like Sanath Jayasuriya, Marvan Atapattu, Mahela Jayawardene and Kumar Sangakkara. However, since the retirement of these legends, and also Thilan Samaraweera, who played a good support act to the big names for over a decade, the Lankans have struggled to put together a decent batting order. The poor results in recent times are a clear indication of what the team in missing of late. We put together the numbers of the current batting line-up in Sri Lanka, and it tells a rather sorry tale. 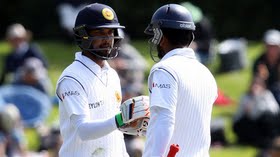 Dimuth Karunaratne: The opener made his Test debut back in 2012. In 27 Tests since, he has managed a disappointing 1664 runs at an average of 33.28, too low for an international opener. The fact that he has been persisted with proves the scarcity of resources Lanka have. In 27 Tests, Karunaratne has managed only three hundreds and seven fifties. He has failed to reach even 30 in the two Tests in England so far.

Kaushal Silva: His is a story almost parallel to Karunaratne. Having made his Test debut in 2011, Silva has featured in 26 Tests, and has managed just over 1500 runs at a poor average of 31.29. During the period, Silva has crossed the hundred mark only twice although he has 10 fifties to his name, a very poor conversion rate. Against England so far, he has registered scores of 11, 14, 13 and finally 60.

Lahiru Thirimanne: He has been very much like an enigma in Test cricket for Sri Lanka, much like Chamara Kapugedera has been in one-dayers. The talented 26-year-old made his debut in 2011, and has since featured in 25 Tests, scoring 1039 runs at an extremely poor average of 24.16 with only one hundred and four fifties. In 49 innings, Thirimanne has crossed the half-century mark only five times. In the current series in England, he has got into double figures on all four occasions, but his best has been restricted to 22.

Dinesh Chandimal: Of all the rising stars, he has been the most impressive. Since making his debut in 2011, Chandimal has played 27 Tests, and has scored 1988 runs at an impressive average of 45.18 with six hundreds and 10 fifties. The numbers make it clear that Chandimal has the best conversion rate of all the batsmen in the Lankan line up at present. He still needs to work on his consistency though. Before cracking 126 in the second innings at Durham, his previous scores in the series were 15, 8 and 4.

Kusal Mendis: He is the most inexperienced of the lot, having played only five Tests. But, it hasn’t been a confident start for him as well. In 10 innings, he has managed only one fifty, the knock coming in the second innings at Leeds. He’s averaging only 29.70. The 21-year-old still has time on his side though, and Sri Lanka would hope he doesn’t go the Thirimanne way.