Chris Rogers of Australia became the second oldest Test player from his country to hit a maiden Test hundred. He was 35 years and 343 when the fourth Ashes Test of the ongoing series kicked-off at Chester-le-Street.

Chris Rogers of Australia became the second oldest Test player from his country to hit a maiden Test hundred. He was 35 years and 343 when the fourth Ashes Test of the ongoing series kicked-off at Chester-le-Street. Among Australians, Rogers is next only to Arthur Richardson, who scored his maiden Test hundred at the age of 37 years and 351 days against England at Leeds on in July 1926. He made exactly a hundred during his 180 -minute stay at the crease before being run out. Here’s a look at some other interesting names on the list of oldest players to score their maiden Test century.

Peter Kirsten: The South African, who lost out on most of his cricket days since South Africa were banned from the game due to apartheid, was 39 years and 82 days old when he registered his maiden ton, against England at Leeds in August 1994. Kirsten was the only centurion in South Africa’s first innings, as the Proteas replied strongly to England’s first-innings score of 477. Coming in at number six, Kirsten hit 104 from 226 balls with the aid of 13 fours. Thanks to Kirsten’s brilliance, South Africa replied with 447 in the drawn game.

Pat Symcox: Another South African, Symcox was known for his bowling capabilities, but was a decent bat, and made his maiden Test hundred at the age of 37 years and 306 days against Pakistan at Johannesburg in February 1998. In the first innings of the Test, Symcox was the top scorer, making 108 coming into bat at number 10. He faced 157 balls, and slammed as many as 17 fours as South Africa recovered from 166 for 8 to 364 all out. The Test ended in a draw. 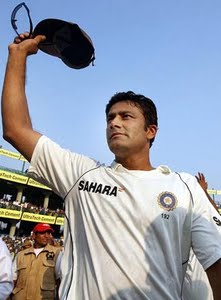 Anil Kumble: India’s legendary leg-spinner is the surprise entrant in the list. He had a few Test half-centuries before, but getting a maiden Test hundred was nothing short of a dream come true. Kumble achieved the feat when he was 36 years and 296 days old against England at The Oval in August 2007. India batted first in the Test and amassed 664. Coming in at number 8, Kumble blasted an unbeaten 110 from 193 balls with the aid of 16 fours and one rare six. Although the Test was drawn, it was memorable occasion for India as they won the series 1-0.

Clayton Lambert: The former West Indian opener is another surprise entry in the list of oldest players with maiden tons. He was 36 years and 38 days old when he made 104 against England at St. John’s in March 1998. Having bowled out England for 127, West Indies replied strongly courtesy Lambert’s brilliance at the top of the order. His 104 came from 232 balls with the aid of 10 fours and one six. Carl Hooper also made a hundred as West Indies declared on 500 for 7 and went on to win the Test by an innings and 52 runs.