All-rounder Irfan Pathan has been ruled out of the upcoming Celkon Mobile Cup Tri-Series in West Indies because of a hamstring injury. The 28-year-old Pathan has been replaced by Bengal fast bowler Shami Ahmed.

All-rounder Irfan Pathan has been ruled out of the upcoming Celkon Mobile Cup Tri-Series in West Indies because of a hamstring injury. The 28-year-old Pathan has been replaced by Bengal fast bowler Shami Ahmed. It may come as a surprise to the fans that Pathan was injured despite not playing a single game during the ICC Champions Trophy. The injury could have been because of the strain that Pathan carried throughout the IPL playing for the Kings XI Punjab. 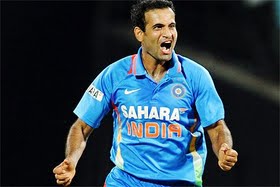 The replacement for Pathan – Shami Ahmed is a good one indeed. Shami can bowl at brisk speeds of 140 kmph and can hurry the batsmen off the track. The 23-year-old has played 5 ODIs taking 4 wickets which might sound as limited success. But Shami had shown tremendous promise in those matches, especially his ability to bowl with an upright seam. It was a pity that Shami was dropped from the Indian team for no reason. Perhaps it could do with the limited opportunities that he got in the IPL with the Kolkata Knight Riders that Shami Ahmed’s name was forgotten by the Selectors for the Champions Trophy.

Shami has some experience of playing in the West Indies which he did last year for India A taking 13 wickets in three 4-day games. The Celkon Cup begins on the 28th although India’s first match will be on the 30th against hosts West Indies at Kingston.