AUS vs NZ 2nd Test Preview, Live Score: Having won the opening Test at Brisbane comprehensively, Australia would go into the second Test as clear favourites, even if one takes into account New Zealand's ability to fight back.

Having won the opening Test at Brisbane comprehensively, Australia would go into the second Test as clear favourites, even if one takes into account New Zealand's ability to fight back. What would have pleased the hosts most about their effort at the Gabba is the fact that they dominated the Test in all departments of the game, and this is what they will be keen to continue with. New Zealand, on the other hand, were completely overpowered by Australia, and would seek a reversal in fortune. They will take solace from the fact that Brisbane is Australia's fortress, which hasn't been breached by any visiting side over a number of years. 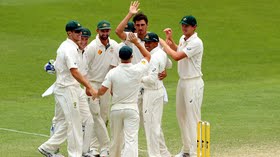 The positives for Australia from Brisbane were plentiful. Opener David Warner got smashing hundreds in both the knocks, and looked in complete control during his stay at the crease. If Warner succeeds in his ruthless ways in Perth as well, Kiwi bowlers will be in for another hard slog. Apart from Warner, the new-look batting also fired for Australia, possibly exceeding their own expectations. Joe Burns earned a hundred after missing out on one in the first innings. Usman Khawaja registered a big ton on his Test return while Adam Voges also got 80 plus. Steven Smith wasn't needed to do much, and that doesn't augur well for the visitors.

Although not as sharp as their batting, Australia's bowling was also impressive, and performed the job expected of them. Mitchell Johnson and Mitchell Starc took turns to scalp major wickets in either innings. And, even as the 34-year-old Johnson has hinted at retirement in the near future, he is one wicket behind Brett Lee's tally of Test scalps so that should serve as an encouragement for the left-arm pacer at Perth. Once again, Nathan Lyon proved at Brisbane that on a fifth day surface, he can be an effective wicket-taker. Lyon knows his limitations well, and bowls with a plan in place.

New Zealand have to overturn both their batting and bowling efforts to stay alive in the series. Tim Southee and Trent Boult failed to deliver in the opening Test, but they should be expected to do better at Perth where the pitch is likely to be a lot more responsive for fast bowlers. The back injury, which prevented Southee from bowling in the second innings at Gabba would be a cause of concern for the Kiwis. Brendon McCullum will be hopeful that Southee can be at his fittest best at Perth. The injury to Jimmy Neesham, which has ruled him out of the series, has only added to New Zealand's problems. It is thus important for the likes of Matt Henry and Mark Craig to perform.

New Zealand will expect a lot better from their batsmen at Perth. Apart from Kane Williamson, who shone in both innings, and skipper McCullum, who led a blistering counterattack on the Aussies, they did not have much to show at Brisbane. Their openers, Martin Guptill and Tom Latham, will be under pressure, and must come up with the goods. Ross Taylor too must deliver for the team, considering his vast experience in international cricket. In wicketkeeper BJ Watling, they have a decent wicket-keeper bat, but Australia would put him as well under pressure for sure. The Kiwis have their task cut out going into Perth.