Toss: England won the toss and elected to field first 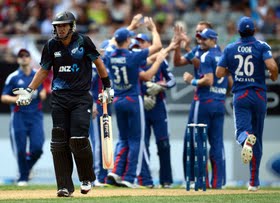 Graeme Swann got his 100th ODI wicket in this match.

Ross Taylor is bemused as his caught behind decision is upheld by the third umpire.

NZ vs Eng have met 9 times at the Eden Park, Auckland. New Zealand won 5 times, England
4 times. But since start of 1992 England have won 4 of the five ODI at the ground.