India are the favourties to clinch a 2-0 cleansweep tomorrow at the M Chinnaswamy Stadium in Bangalore but would need the batsmen to come good for one last time in the series.

Update at Stumps on Day 3: India are the favourties to clinch a 2-0 cleansweep tomorrow at the M Chinnaswamy Stadium in Bangalore but would need the batsmen to come good for one last time in the series. New Zealand finished the third day’s play with an overall lead of 244 runs with still one wicket in hand. R Ashwin was India’s savior taking a 5th five-wicket haul in only his 8th Test Match. It was a hectic third day’s play that saw 14 wickets go down! New Zealand are on the brink of getting bowled out at 232 for 9 in 69 overs by stumps on Day 3.

New Zealand messed it up with its batsmen looking good but throwing away their wickets because of sheer inexperience. The tourists still have a chance of pulling off an upset win should their bowlers come up with something special tomorrow.

The final session saw India break the fifth wicket stand with Daniel Flynn (31) top edging a cut shot off a bouncing off break from Ashwin to first slip. India was desperate to get another wicket and brought in speedster Umesh Yadav who with two near bouncers hit the back of the head and then the wrist of Wicket Keeper Kruger van Wyk. Despite that the New Zealand Keeper went onto score a gritty 31 (from 48 balls) before he was trapped lbw by a stump to stump bowled carrom ball from Ashwin which broke a crucial 6th wicket stand of 55 runs.

In the 62nd over, a well set James Franklin threw away the advantage of the Kiwis by jumping down the track way too early for an inside out lofted shot to be stranded out of his crease for a stumping by a widish off break from Ashwin. Franklin was on 41 (from 90 balls) when he lost his wicket with the Kiwis at 216 for 7. In the space of two balls, Ashwin and Ojha got a wicket each leaving Kiwis at 222 for 9. First, Ashwin clean bowled Southee through the gate with a turning off break after luring the right hander into a big cover drive. The very next ball, Pragyan Ojha bowled a straighter one which drifted in to strike the pad of Doug Bracewell (22) infront of middle. By Stumps, New Zealand are left with no.10 Jeetan Patel (10*) and no.11 Trent Boult (0*).

Update at Tea on Day 3: India are on top at Tea as New Zealand lost four key wickets in the post lunch session. The two big players – Brendon McCullum and Ross Taylor, who are capable of taking the game away from India have perished. The Kiwis at Tea hold onto a lead of 135 runs with Daniel Flynn on 25* (from 44 balls) batting along with James Franklin (11*).

The much needed breakthrough for the hosts came from Umesh Yadav in the third ball after lunch with Martin Guptill (7) losing his leg stump to a low inswinging full toss. Yadav struck again in his next over by forcing dangerman Brendon McCullum (23) to edge his late outswinger to the keeper to leave the Kiwis at 31 for 2 in 7.1 overs.

After a wait of more than 11 overs, India found their next wicket when Kane Williamson (13) playing for the turn in a forward defence to R Ashwin was foxed by a straighter one which took an edge to slip. It was yet another first over wicket for R Ashwin as he ended a promising stand of 38 runs. India’s next big wicket came from Pragyan Ojha as Ross Taylor after a good looking 35 (from 66 balls) shuffled far too across in a slog sweep to get hit on the pad infront of middle to a delivery that was fuller and straightened to beat the bat.

Update at Lunch on Day 3: New Zealand are on top in the Bangalore Test at Lunch on Day 3 as they took their overall lead to 41 runs following a good start of 29 for no loss in 5 overs in the second innings. The pressure is on India to bowl out New Zealand to a total as low as possible on a pitch in which the cracks are opening up rapidly. Brendon McCullum, who survived a close lbw shout off Zaheer is the main worry for India as he has raced away to 21* from just 15 balls. 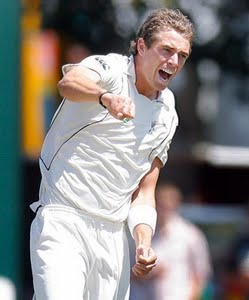 Earlier, Tim Southee claimed incredible figures of 24-6-64-7 to bowl the Kiwis to a slender lead of 12 runs. India got bowled out for 353 in 96.5 overs with about 25 minutes to go for lunch. While the overnight batsmen Virat Kohli and MS Dhoni didn’t contribute much this morning, it was a heroic 32* from R Ashwin that helped India keep NZ down to an insignificant lead.

The morning session began with Virat Kohli bringing up a 2nd Test century in style but soon got out lbw after offering no shot and padding up to a Tim Southee inswinger with the second new ball outside off. Kohli finished with 103 (from 193 balls with 14 fours and a six) while adding up a crucial stand of 122 with his Skipper. Dhoni (55 from 90 balls with 9 fours and a six) immediately followed Kohli back to the pavilion after falling across in a backfoot flick off a Southee inswinger to leave India in a bad position at 312 for 7. Zaheer Khan heaved his first ball off Southee for a six but got out to the same bowler fending a rising delivery to the keeper. Pragyan Ojha fell in the same over of Southee edging him behind to the keeper with India at 320 for 9 in 88 overs.

India was lucky to get a lovely knock from R Ashwin, who proved once again that he is a genuine all-rounder at this highest level. Taking much of the strike, Ashwin sweetly got 32* (from 40 balls with 5 fours) before no. 11 Umesh Yadav was eventually done in for pace by Trent Boult. The last wicket added 33 useful runs while lasting nearly 9 overs to cut down New Zealand’s lead to just the 12 runs.

Build Up to Day 3: The third day’s play of the Second and Final Test at Bangalore is all set to begin under clear blue skies although there are chances of isolated showers. Well, India will resume the crucial third day’s play at 283 for 5 with a first innings deficit of 82 runs. All eyes will be on Virat Kohli whether he would be getting his 2nd Test century or not which is just another seven runs away. India will be up against the second new ball which will give a great chance for the Kiwis to wrap up things quickly.