Steve Smith after blasting 211: England's short bowling meant they can't hit my pads or nick me off

England continued to suffer from Steve Smith's insatiable appetite for runs as he slammed his third Ashes double hundred to put Australia in a position of dominance.

England continued to suffer from Steve Smith's insatiable appetite for runs as he slammed his third Ashes double hundred to put Australia in a position of dominance. Smith's presence reiterated what the Aussies missed at Headingley, and Ben Stokes' magic seemed like a distant memory.

After rain frustrated both the teams on day one at Manchester, it was all Smith on Day 2. He stood at the crease for 319 balls, during which he amassed 211 runs and allowed Australia to declare at 497 for 8. Smith rode his luck as Jofra Archer dropped him on 65. Then, after he was past his hundred, Jack Leach had him caught, only for replays to show that he had overstepped.

Smith was aided by contrasting half-centuries from skipper Tim Paine and Mitchell Starc. While the captain held one end up to allow Smith to prosper, Starc rubbed salt into England's wounds taking on their tired bowlers. Jofra Archer saw the other side of Test cricket, finishing wicketless for 97 runs in 27 overs. Ben Stokes was expensive too and ended up with an injured soldier.

England's day got worse as opener Joe Denly fell to Pat Cummins, caught smartly by Matt Wade at short-leg. They were 23 for 1 at stumps. Rory Burns and nightwatchman Craig Overton have a massive task on hand when they resume on Day 3. 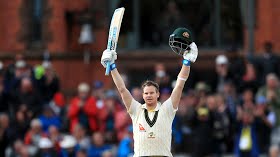 Post the day's play, Smith stated that the short-pitched stuff meted out to him as a reminder of the Lord's blow played into his hands. Smith, who has now amassed 589 runs in the series, despite missing out on three innings, was quoted as saying by The Guardian, “I faced a lot of short-pitched bowling and haven’t had too many issues. The opposition bowling there means they can’t hit my pad or nick me off. It softens up the ball too and that plays into my hands.”

Smith added that missing out on the Headingley game was disappointing but admitted that he wasn't hundred percent fit and hence the right decision was made. “It’s satisfying to get a big score. I was disappointed to miss Headingley but I wasn’t quite right and the right call was made. It gave me time to recover and I felt good. I was confident and have got us into a nice position," he further stated in The Guardian report.

The former Aussie skipper conceded that he was lucky to have survived two chances on 65 and 118. “I had some luck, yeah. You always need some when you score big runs. It fell my way today. I was in a hurry for 20 minutes and after being caught off the no-ball I switched myself back on. When I saw the foot over the line I thought ‘how good is this? I get to carry on batting,’” Smith explained.

England also gave Paine two lives on 9 and 49, allowing the captain to bring up a much-needed fifty. Whether England have let the Ashes slip along with the dropped chances, we will know soon.