Everyone knows that Madan Lal dismiss Viv Richards in the 1983 World Cup final thanks to a brilliant catch by Kapil Dev.

Everyone knows that Madan Lal dismiss Viv Richards in the 1983 World Cup final thanks to a brilliant catch by Kapil Dev. But, the former Indian captain revealed on Wednesday during an event for a film on the World Cup that he wasn’t keen to bowl Lal for that over. 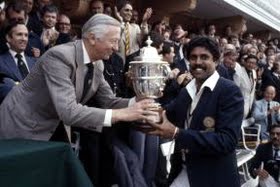 “Before that particular over, two-three fours were hit off Madan. So I went to Madan asked him to take a break and comeback after a few overs. To which Madan said ‘Kapsi you give me the ball. I have earlier dismissed Vivian Richards, I can do it once more,” Kapil recalled according to a PTI report.

“When a player is so confident, even though I was not too keen, I thought, let him bowl another over. They say, some things just happen for you and this happened with us,” Kapil added.

Reminiscing the victory, Kapil admitted that the team was not confident at the start, but things just happened as the tournament progressed.

“In our hearts, we knew that our team was not the best in the business. Halfway through the tour, we realised that we had a team. When our team was picked, we did not have much confidence but once we started winning matches, everyone was more motivated and played like leaders,” he explained.