After the first two days of the Durban Test, there was no clear winner as both South Africa and England fought tooth and nail to grab the advantage. It was on day three that the visitors finally pulled ahead with a solid all-round show.

After the first two days of the Durban Test, there was no clear winner as both South Africa and England fought tooth and nail to grab the advantage. It was on day three that the visitors finally pulled ahead with a solid all-round show. The way the match is poised after day three, South Africa will have to bat exceptionally well to save the Test. England ended the day with a handsome lead of 261, with seven second-innings wickets in hand, and Joe Root having made yet another precious half-century. This was after the South Africans themselves crumbled to 214, with Moeen Ali's four-for marking a continuation of Proteas' woes against spin, so prominent in the series in India.

South Africa would have thought playing at home would bring them better batting luck, but that wasn't to be the case. Their woes continued on day three at Durban as well, with the hosts losing six wickets for 77 runs to end their innings abruptly, and handing England a crucial 89-run lead. Even as wickets kept falling from one end, opener Dean Elgar batted right through. He was unbeaten on 118 when the last South African wicket fell, thus becoming the sixth player from his country to carry his bat. After a failed batting show, South Africa were dealt another big blow as Dale Steyn pulled up in his fourth over, and walked off with pain in his right shoulder.

An uncharacteristically poor fielding effort added to Proteas' woes. Morne Morkel was the unlucky bowler of the day even as he bowled with heart, trying his best to make up for Steyn's absence. Elgar put down Nick Compton when the opener was on 11, a easy chance at second slip. Root soon gloved a pull to AB de Villiers but the wicket-keeper failed to hold it above his head. But, life only got more cruel for the speedster. Compton edged him on 45, only for de Villiers to drop another chance. Almost as if having pity on the bowler, Compton eventually perished for 49, glancing one which de Villiers held on to.

South Africa had gotten off to a rather credible start as Dane Piedt sent back both the openers. Skipper Alastair Cook was trapped lbw for 7 while debutant Alex Hales was out for a hard-fought 26 after failing to keep out long on with a lofted stroke. Root and Compton, aided by South Africa's generosity and their own skills, put up a good fight for the visitors, so good that by the end of the day England firmly had their noses in front. While Compton failed to reach his second fifty of the match, Root reached yet another half-century off 96 balls. It was a patience personified knock in which a slog sweep off Piedt stood out. 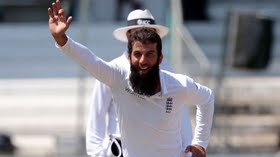 Even as their fielding was terrible, and bowling average, it could be their uninspiring batting that could again cost South Africa a Test match. Stuart Broad had the hosts in early trouble getting through the defence of Temba Bavuma as the batsman dragged one that kept low on to the stumps. JP Duminy's woes against spin continued as Moeen turned one away to find the edge. Kyle Abbott inside edged the off-spinner into the hands of a diving short leg, the third umpire eventually making the decision. Steyn stayed put for a while, but eventually slogged Moeen straight to mid-off. Steven Finn then cleaned up the tail with the second new ball to leave Elgar stranded.