The BCCI on Sunday has announced that Mr N Srinivasan has stepped aside from the Honorary President post. Mr. Jagmohan Dalmiya, former ICC and BCCI President, has taken over as the BCCI Interim President.

The BCCI on Sunday announced that Mr N Srinivasan has stepped aside from the Honorary President post. Mr. Jagmohan Dalmiya, former ICC and BCCI President, has taken over as the BCCI Interim President. It is learnt that nobody except Mr. IS Bindra of the Punjab Cricket Association had asked for the resignation of N Srinivasan during the BCCI Working Committee meeting held on Sunday.

Anurag Thakur, the BCCI Joint Secretary and also a BJP MP, has said that N Srinivasan had made a speech in which he convinced the board members that they were no direct charges against him and it was only the perception that has been created about him in the media. Srinivasan said that he would temporarily step aside from the top most post in the BCCI and will return again if he comes out clean in the subsequent enquiry. 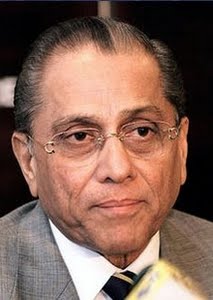 There has been a systematic propagation on various news channels asking for N Srinivasan to quit as the BCCI President ever since his son-in-law Gurunath Meiyappan was arrested in the IPL spot-fixing scandal. In the recent weeks, the country has been witnessing mostly news related to the spot-fixing episode while the bigger scams have been shelved temporarily by the media.

N Srinivasan has been facing the media ire ever since it was revealed by the Police that Gurunath Meiyappan had laid bets on IPL matches despite being the Owner/Team Principal of the Chennai Super Kings. There was a huge conflict of interest with N Srinivasan as the BCCI President and also the owner of the India Cements which is the parent company of the Chennai Super Kings. Srinivasan has so far remained defiant despite pressure mounting on him from all fronts.

The BCCI is experiencing internal politics played between the Sharad Pawar faction and the Srinivasan group. Jagmohan Dalmiya is thought to be Srinivasan’s man and someone who is against Union Minister Sharad Pawar.

Meanwhile, the Indian Cricket Board has asked Sanjay Jagdale and Ajay Shirke to withdraw their resignations from the posts of Secretary and Treasurer respectively. However, Jagdale and Shirke have gone onto record saying that they will not come back in the BCCI fold.

Mr. N. Srinivasan announced that he will not discharge his duties as the President of the Board till such time that the probe is completed. Till such time, Mr. Jagmohan Dalmiya will conduct the day to day affairs of the Board.

The Committee expressed full confidence in Mr. Sanjay Jagdale and Mr. Ajay Shirke and requested them to withdraw their resignations in the larger interest of the Board.