England bounced back to claim The Oval Test by 135 runs on Sunday. Chasing an improbable target of 399, Australia folded up for 263

England bounced back to claim The Oval Test by 135 runs on Sunday. Chasing an improbable target of 399, Australia folded up for 263. For the first time in the series, Steve Smith was dismissed for under 80 as Stuart Broad had him caught at leg gully for 23. Despite a fighting hundred from Matthew Wade, Australia fell way short in the end as Broad and Jack Leach claimed four wickets each while skipper Joe Root was the surprise package with two scalps.

The victory meant the series was shared 2-2. However, the Aussies retained the Ashes on the basis of being the defending champions in the event. Jofra Archer was declared man of the match of his brilliant bowling even as Steve Smith and Ben Stokes were named Australia and England's Player of the series respectively. 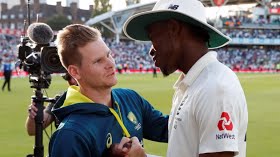 Looking back at an incredible tournament in which he scored 774 runs, Smith described the feeling as amazing and described the cricket played as fantastic. "Really proud that I have been able to perform. You have always got to believe."

On the loss at The Oval, he added, "The middle of the wicket really played well. Wade showed that if you hang in there you could score. But not enough people hung in there with him."

Smith also praised Archer with whom he had an enticing deal throughout the series. Archer had forced Smith out of the Headingley Test by dealing a nasty blow to him on the head. "I saw Jofra last year at the IPL and realized he is a very special talent. He has got a very bright future," admitted Smith.

Stokes, who had a memorable summer, with the World Cup heroics and the superhuman effort at Headingley, said in the post-game discussion that the Manchester loss was disappointing but felt that it was a wonderful series between two evenly matched sides.

"Obviously it was disappointing at Manchester not to have a chance to get the urn back. I think we can't look back and say what could have happened. It has been a wonderful series. It has been two very evenly matched teams. Everyone came into the summer and have shown they can put their hands up. Burns and Denly have shown what they can do for the team," Stokes stated.

While Aussie skipper Tim Paine was pleased to win an Ashes in England after 18 years, he did admit that the batsmen let the bowlers down at The Oval. On the other hand, the England captain Joe Root praised Archer for making things happen and also made a special mention of Sam Curran, who picked up crucial wickets in the final Test.