This has been such a long tour for South Africa – the hard fought win in the Tests followed by the intensely contested ODIs, which the teams shared. They now head into the final leg of the tour, and a highly significant one considering what is to follow.

This has been such a long tour for South Africa – the hard fought win in the Tests followed by the intensely contested ODIs, which the teams shared. They now head into the final leg of the tour, and a highly significant one considering what is to follow. Under normal circumstances, in spite of the popularity of T20, these matches are viewed as an opportunity to relax either prior to the beginning of a gruelling series or towards the end of one, depending on the scheduling. This time however, neither side can take the three T20 matches lightly since the World T20 in Sri Lanka is just days away. 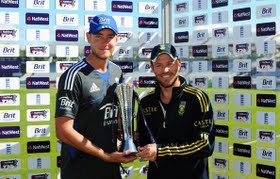 For one, England would be pleased with their performance in the ODIs following the disappointments in the Tests, and would look to continue the good run in this format as well. The English captaincy will switch hands again, as all-rounder Stuart Broad, who has been England’s skipper this format for a little while now, takes charge of the side. T20 specialist Alex Hales will also be seen in action. Hales, who was brought in as replacement following Kevin Pietersen’s unavailability, scored an impressive 99 in his last match, and England would be keen to groom him as Pietersen’s replacement. The return of spinner Graeme Swann, who missed the ODIs, will also boost England’s prospects.

Among the worries for England is the fact that Steven Finn and Tim Bresnan have some niggling woes. Keeping this in mind, the England management has called up James Anderson, who hasn’t played this in this format for the country in the last three years. The form of Ravi Bopara is also a concern. After walking away from the Tests for personal reasons, he returned for the ODIs, but did not look in any sort of rhythm. The only reason he has been retained in the squad is because of his good performance against West Indies in the last T20 England played. His progress will be monitored closely by England.

As far as South Africa are concerned, they would look forward to inspiration from their leader A B de Villiers. It has been amazing that the flexible de Villiers, who was forced to take on the gloves following Mark Boucher’s sudden retirement due to injury, has gone on and on, without flinching. It’s a tribute to his stamina and commitment. A B will continue donning the gloves in the T20s as well.

Like England, they too have got in some T20 specialists. Richard Levi, who holds the record for the fastest hundred in this format, will join the sublimely in form Hashim Amla at the top of the order– what a combination that will be with grace meeting brute force. The return of talismanic all-rounder Jacques Kallis, whom South Africa missed in the ODIs, will give the Proteas a fillip for sure. Kallis’ IPL-winning experience could also work in South Africa’s favour. Former skipper Johan Botha and big-hitting all-rounder Albie Morkel, if fit, may also find themselves in the XI. Another close contest in the offing.