Former India coach Greg Chappell has opened another can of worms by revealing in his book that not everyone in the Indian team enjoyed Rahul Dravid’s success when the latter was the captain of the side.

Former India coach Greg Chappell has opened another can of worms by revealing in his book that not everyone in the Indian team enjoyed Rahul Dravid’s success when the latter was the captain of the side. This is a shocking revelation, if it indeed is true. It is known to all that the former India number three is amongst the thorough gentlemen in the game, and one of the most respected cricketers to have ever stepped on to the playing field. This is what makes it even more difficult to believe that players in his own team would not be happy with either his individual success or that of the team as a whole. 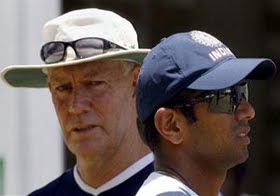 We might never come to know the entire truth behind the story since, knowing Dravid the person, he would not come out in the open and bother to answer questions related to the same, well aware that it would unnecessarily flare up another controversy – the last thing a struggling Indian team needs to be confronted with at the moment. As for Chappell, one doesn’t quite know how much to believe him for some cricketers in the present Indian team, as well as the Aussie administrators back home have been very critical of the controversial former Australian captain’s work ethics.

Regarding his latest allegation, one can only assume that Chappell may be referring to another former Indian, with whom he shared a well-publicised tumultuous relationship. Again one can’t be quite sure of this presumption, just like CERN scientists cannot confirm 100 per cent of the Higgs Boson or the ‘God Particle’. Unless and until someone comes out with a clear cut revelation on the same, all talks can be relegated to rumours and gossip mongering. The sad part of incomplete statements such as the one made by Chappell in the book is that they say a lot without actually saying anything. It would be tough, but writers should either have the guts of naming people, if they believe they are involved in wrongdoing, or avoid such half-baked disclosures altogether. The in-between approach helps nobody. Dravid and the rest of the Indian team will now be pounded by questions related to Chappell’s accusation, which will not do the side any good. The Indian team will be about to begin preparations for the soon-to-begin Lankan team, and such distractions are best avoided.

Even if no one else comes out with a counter-punch to Chappell’s random jibe, expect Sourav Ganguly to make some comments for sure. The Chappell-Ganguly spat could inspire a thesis. The two never let go of an opportunity to take at potshots at each other in public. Wait and watch.