After a disappointing rain-affected ODI Series, Sri Lanka and New Zealand will clash against each other in whites with the First Test beginning in the Fort City of Galle on Saturday.

After a disappointing rain-affected ODI Series, Sri Lanka and New Zealand will clash against each other in whites with the First Test beginning in the Fort City of Galle on Saturday. The New Zealand batsmen by now must have had enough experience of playing spinners on turning tracks as they recently had a Test Series in India. The Ross Taylor led Kiwis may not be a big threat to the Lankans but are expected to put up a decent show. But without Daniel Vettori, the Kiwi bowling could struggle to keep one end quiet atleast. 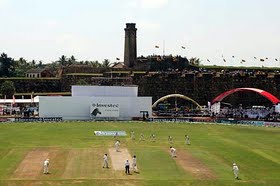 Once again weather is likely to cause problems in this part of the world with Galle expected to receive rain on three of the five days of the Test Match! The pitch at Galle usually helps the seamers and the spinners, and often produces exciting results. Sri Lanka have a problem at the top of the order with Tillakaratne Dilshan getting ruled out of the match with a back problem. His place has been taken by the left-handed Dimuth Karunaratne who is set to make his Test Debut.