When England and Pakistan clash in the fourth and final ODI of the series at Dubai, they will find themselves in a very unfamiliar position.

When England and Pakistan clash in the fourth and final ODI of the series at Dubai, they will find themselves in a very unfamiliar position. The visitors will go in with a chance of winning the series. With a win in the previous ODI, they have already ensured that they cannot lose the series from this point. It is a known fact that England are not great exponents of one-day cricket. Although they have reached three World Cup finals, that was in an altogether different era. Away from home, they have rarely done well in the format. In that sense, their performance so far has already been a giant leap. 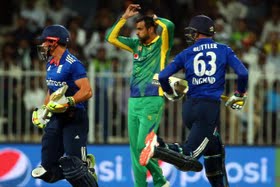 England should be confident going into the final clash, as they have done better than the hosts over the course of the three matches so far. Their batting is in good nick as Alex Hales registered his maiden ODI hundred in the second match while James Taylor took the side to victory with an efficient half-century in the previous game. One of the biggest concerns for England in recent times has been the lack of runs from Jos Buttler. And while that remains a cause of worry, the think-tank would be pleased with the fact that Buttler spent some time out in the middle in the previous game. Opener Jason Ray and Eoin Morgan have also been among the runs.

England's bowlers have also been impressive in spite of the fact that they are not greatly experienced. Chris Woakes has bowled very well to claim eight wickets. Some of his scalps have been well earned. Reece Topley also has made an impression with his efforts, and so far has five scalps to his name. This series was going to be significant for leg spinner Adil Rashid, and so far, he has done his chances no harm. First in the Tests, and now in the ODIs, he has impressed with his potency. The position of Moeen Ali though remains a debate. He is going decently with the ball, but isn't contributing with the bat.

As for Pakistan, they have themselves to blame for the do-or-die situation they find themselves in. They began the series with a bang, starring with both bat and ball. However, their performance has wavered since. The batting in particular has been disappointing. Mohammad Hafeez and Sarfraz Ahmed have played innings of note, but the overall consistency has been missing, and this has hurt Pakistan big time. While Hafeez and Ahmed would be key again, they would do well with contributions from skipper Azhar Ali and all-rounder Shoaib Malik. Babar Azam also needs to make an impact as opener.

Pakistan must also be wary of their running between the wickets. They were atrocious in the last game, and ended up losing three wickets to that mode of dismissal. It is difficult to win matches like that. It is an indication that Pakistan need to seriously work on that aspect of their game. Pakistan's bowling also suffered with Yasir Shah unavailable in the last match. They would hope he will be ready for the do-or-die clash. Mohammad Irfan has impressed, and he will be keen to continue the same. At the same time, he would seek better support from the rest if Pakistan are to level the series.