Referring to the Steve Smith brain fade incident, Ashwin chided that it reminded him of his junior cricket days. “Steven Smith actually turned back and asked the dressing room if he could take a review. That is completely unheard of. The last time I thought that to happen was in an Under-10 game, when my coach used to suggest where point fielders and cover fielders used to stand. It was really surprising. I have a lot of respect for Steven Smith, but that was very, very surprising," Ashwin was quoted as saying in an NDTV report.

Ashwin also revealed that had told Australian opener Matt Renshaw that he would have them for "soup and dessert" if they did not score big in reply to India's first innings total of 189, "They were having a lot of chat in the park when we were actually going out to bat and we were down. It is very easy to have a chat when you are down. I told Matt Renshaw when he was batting in the first innings that if they didn't score big I would have them for soup and dessert. I am very happy that it happened." 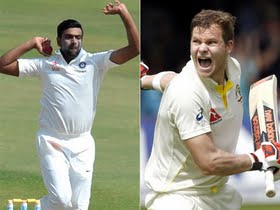 Pujara added, “They were talking a lot and probably sledging is something which, as a unit, we felt that we can give them back. They were always under pressure when they walked in to bat, and I wanted to make sure their batsmen were thinking about it, especially David Warner. Whenever he walks in to bat, Ash is always happy, so I always keep reminding him that Ash is the one who picks up his wicket," said Pujara.

On his send-off to Australia fast bowler Mitchell Starc, Ashwin responded, "I saw yesterday, Abhi (Mukund) pulled Mitchell Starc for a six, he top-edged it for six. But yes, I don't think he was in any sort of hurry when he pulled that ball, and Mitchell Starc suggested that he would hit him on the helmet. I don't know, people generally have the habit of saying I'll hit you back on the helmet at Gabba. "It doesn't matter, this is Bangalore, so I thought I must tell him that he got hit off me, in the first innings, on the helmet,” Ashwin concluded.