MI Vs SRH: Pollard demonstrated what a stunning game changer he is

The game between Mumbai Indians and Sunrisers Hyderabad on Monday at the Wankhede Stadium was all about one man and his single-handed domination of the opposition.

The game between Mumbai Indians and Sunrisers Hyderabad on Monday at the Wankhede Stadium was all about one man and his single-handed domination of the opposition. When Kieron Pollard walked into bat, Mumbai were well behind the asking run rate, and their innings seemed to be heading nowhere. Pollard hasn’t had the best of seasons this year, but on Monday he was unstoppable. There are days when you hit everything off the middle of the bat. It was one such day for the big-hitting West Indian against Hyderabad.

To sum up the match in a nutshell, it was two overs that all Pollard needed to turn the game on its head. In the 17th over of the chase, he slapped three sixes and a boundary of Thisara Perera’s over. The most stunning aspect of Pollard’s innings was that he hit the ball with such great ferocity that every time he went for a big shot, he ensured that the ball cleared the ropes by quite a distance. Pollard’s confidence during his sensational knock was also most amazing. In spite of the monumental task on hand, he displayed the belief that he could single-handedly overhaul the target, and did the same with utmost alacrity. 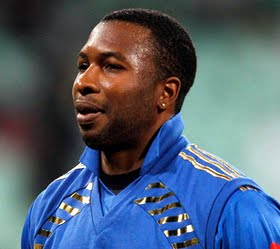 With Pollard firing on all cylinders towards the end, the substantial knocks played by the batsmen earlier in the innings proved to be significant. Dwayne Smith got the side off to a brisk start with some aggressive strokes. Although Sachin Tendulkar retired hurt after getting a decent score, he and Dinesh Karthik saw to it that Mumbai were in with an outside chance provided their latter order batsmen fired. This is exactly what transpired towards the end of the innings. Even as Pollard blasted away at the end, skipper Rohit Sharma batted sensibly to hold one end up.

When someone like a Pollard comes up with such a stunning knock, there is very little the bowlers can do. At the same time, it must be mentioned that Hyderabad could have bowled somewhat better. Perera, in particular, was ordinary. In spite of the fact that Pollard took a liking to his length bowling, he kept repeating his mistakes, and allowed the tall West Indian to tear him apart. Amit Mishra’s weaknesses when a batsman goes after him were also evident. He looked all at sea under the gruesome attack by Pollard.

Earlier in the evening, Hyderabad batted with a great sense of purpose. Parthiv Patel and Shikhar Dhawan got the team off to a swift start. Following Patel’s dismissal, Dhawan, Hanuma Vihari and Cameron White came up with superlative knocks to put Hyderabad on top. Hyderabad proved that Mumbai’s bowlers could be put under pressure if attacked. Mitchell Johnson, Dhawal Kulkarni and Pragyan Ojha proved to be pedestrian even as the others came up with competent efforts. In the end though, Hyderabad had no answer to the Pollard storm, which took the game away from them in the blink of an eye.

Turning point of the game: Mumbai robbing 29 runs off Perera’s third over, which completely turned around the game.