NZ vs AUS 1st Test Day 2 report: Australia's Usman Khawaja and Adam Voges scored century to take their side to a commanding position against New Zealand on the second day of the first Test in Wellington.

Australia's Usman Khawaja and Adam Voges scored century to take their side to a commanding position against New Zealand on the second day of the first Test in Wellington. Khawaja scored 140 while Voges walked off unbeaten on 176. In the process, Adam Voges has pushed his Test batting average past 100 and now he has the highest average of any player having played at least 10 Test matches. Visitor's resumed the day's play at 147 for 3 in response of New Zealand's 183 all out, Australia reached 463 for 6. Hence, gaining the lead of 280 runs. 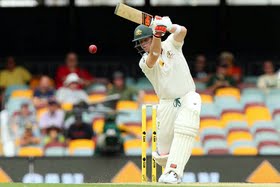 Adam Voges capitalised on the early reprieve he got when he was bowled for seven on day 1 but umpire signalled it a no-ball. Voges scored his fifth Test century to shell Australia towards a big first inning lead and his defence was not penetrated throughout the day. It was Usman Khawaja's fourth ton in as many innings and he is becoming a run machine irrespective of the format of the game he is playing. Voges was involved in 168 runs partnership with Usman Khawaja and 96 runs with Peter Nevill to crash all hopes of New Zealand to come back in the game. New Zealand had a chance to expose the Australian tail in the afternoon session when Trent Boult took wickets in span of three deliveries but Voges and Nevill ensured that the visitors will continue their dominance. Apart from Boult's two wicket, one more wicket fall on the day when Peter Nevill was caught behind by Watling off Corey Anderson for 32. Mitchell Marsh was the most unlucky batsmen of the day when he was caught and bowled by Boult on his just second ball. He departed without troubling the scorers.

Australia have batted themselves into a position where they are unlikely to lose from, but New Zealand's past record at Reserve Basin can provide local fans some hope. The pitch at the Reserve Basin in Wellington has flatten out and it's looking quite different from the surface where Australian fast bowlers had bowled. Hazlewood exploited the moisture on the pitch on day 1 for good effect and bowled out New Zealand at below par score.