England all-rounder Ben Stokes and Indian off-spinner Ravichandran Ashwin are among the 16 marquee players in the upcoming IPL Players' Auction to be held in Bengaluru on January 27 and 28. 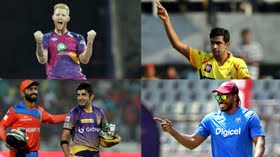 "A lot of strategizing and number-crunching is involved before a cricketer is picked at the IPL Player Auction. The dynamic nature of the auction makes it unpredictable and exciting," IPL Chairman Rajiv Shukla said in a release.

"The eight franchises have given us an indication of what their core would be with their Player Retentions and IPL 2018 Player Auction will be an important step towards the creation of a successful team. The marquee list is full of star players, but I am also looking forward to the uncapped Indian players who have proved their mettle in the earlier editions of the VIVO IPL and are sure to attract high bids,” he further said.

Among the 16 marquee are Shikhar Dhawan, Ajinkya Rahane as well.