Hosts Sri Lanka take on Zimbabwe in the opening encounter of the World T20 at Hambantota. Even as the Sri Lankans would be keen to get off to an impressive start, Zimbabwe have a point to prove for sure – that they still belong at this level, and they can make a statement of intent with a competitive showing at Hambantota against their much-fancied opponents.

Hosts Sri Lanka take on Zimbabwe in the opening encounter of the World T20 at Hambantota. Even as the Sri Lankans would be keen to get off to an impressive start, Zimbabwe have a point to prove for sure – that they still belong at this level, and they can make a statement of intent with a competitive showing at Hambantota against their much-fancied opponents.

It would be a herculean task for sure, but Zimbabwe can take heart from the fact that nothing great is being expected of them. If at all they come up with a decent showing, it will be viewed as a bonus. Sri Lanka, on the other hand, are expected to win. And they should, but it is a fact if there is any pressure on any team in the match, it is Sri Lanka, more so since they are playing at home. 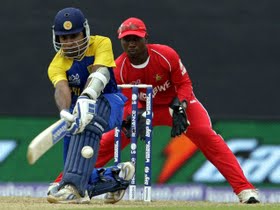 For Zimbabwe to put up any kind of a fight, their experienced players will have to deliver. In Brendan Taylor they do have a shrewd captain and a quality batsman, who has the ability to deliver the goods against the best. A noteworthy knock from him won’t do the side any harm at all.

Plus, Zimbabwe have in their ranks Hamilton Masakadza, who has had enough international exposure to succeed against top teams. Then, there is also Vusi Sibanda, who has returned to the national fold following the resolution of his disputes with the Zimbabwe board. Sibanda is someone who can play match-turning knocks for the team.

In the bowling, Zimbabwe would depend a lot on Prosper Utseya, Graeme Cremer, Kyle Jarvis and Chris Mpofu. None of them are out and out dangerous bowlers, but have been doing a fairly decent job for the side. If they can restrict top sides to manageable totals, the bowlers would have done their job. The most experienced of all the bowlers, left-arm spinner Ray Price, is also part of the squad. But with youthful exuberance being the mantra in T20 cricket, the assured presence of Price is likely to miss out.

Sri Lanka, it has been learnt, might open with Dilshan Munaweera alongside Tillakaratne Dilshan. It may be an experiment for sure, but if they want to try out something new, the game against Zimbabwe is the best option. If indeed the two Dilshans open, skipper Mahela Jayawardene will most likely move down to number three. Former captain Kumar Sangakkara, fresh from his rich award haul at the ICC function, will be keen to continue his splendid run.

Playing spin isn’t among Zimbabwean batsmen’s strongest suits. As such expect both off spinner Akila Dananjaya and once mystery spinner Ajantha Mendis to find a place in the XI. The rest of the players pretty much pick themselves. And while most Lankan bowlers are expected to trouble Zimbabwe, the latter must be wary of Lasith Malinga, who would be raring to get off to a rollicking start.

Sri Lanka will be confident of putting it across Zimbabwe at Hambantota, but they must play their natural game at the same time. Arrogance or an over-cautious approach may put them in trouble.