Started off by a century stand between Karun Nair and Sam Billings and well supported by some professional bowling, Delhi Daredevils replaced Kolkata Knight Riders from the second spot of the points table

Started off by a century stand between Karun Nair and Sam Billings and well supported by some professional bowling, Delhi Daredevils replaced Kolkata Knight Riders from the second spot of the points table. Gautam Gambhir-led squad of Kolkata Knight Riders were comprehensively beaten by Zaheer Khan-led Delhi Daredevils by 27 runs at Firoz Shah Kotla Stadium in Delhi on Saturday.

After losing the all important toss, Daredevils were asked to bat first. Knight Riders made the dream start and got rid of both the openers in the first over. Russel claimed both these wickets in space of just three balls which gave Daredevils a familiar start. Shreyas Iyer was trapped in front for duck while de Kock miscued the pull shot to be caught by Brad Hogg at deep square leg. Soon after that, Sanju Samson was also dismissed to leave Daredevils in crunch situation. Samson was looking promising in his run-a-ball 15, but Sunil Narain was too good for him in his very first over to reduce Delhi to 32 for 3 in the powerplay. Then, playing his first IPL game, Sam Billings came to the crease to support Karun Nair and then both the batsmen done the repair work for few overs before going on for slog. The partnership added 105 runs for the fourth wickets where both these batters scored their respective half-centuries. This partnership gave Daredevils a momentum from where they could think of reaching to a formidable total. Umesh Yadav broke the partnership when he trapped Nair in front of wicket for 68 and two ball later Chris Morris also departed. Two quick wickets could have put pressure on Daredevils but Carlos Braithwaite played a quick cameo of 34 runs off 11 balls to ensure that the home team would finish the inning on a high note. They scored 80 runs off the last six overs to reach to 186 runs which was looking out of equation at the end of power plays. 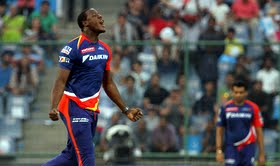 When Kolkata Knight Riders came out to chase the mammoth total, Daredevils skipper Zaheer Khan led the way for them and claimed couple of quick wicket. First he got his counterpart Gambhir, who was caught by Iyer at covers and then pinch-hitter Piyush Chawala was caught in front of the wicket. Robin Uthappa tried to stitch partnership but wickets get trembling from the other end. KKR were 43 for 2 after six. After good cameo with the bat, Braithwaite picked up three wickets in his spell. He dismissed Yousuf Pathan, SuryaKumar Yadav and R Sathish. Though he conceded as many as 47 runs but he took crucial wicket at important juncture of the game which kept Daredevils above their opponent. After these three wickets, the short little partnership between Uthappa and Russell looked to be dangerous for the home side. Uthappa accumulated 29 runs from Mishra’s last two over who was going nice in his first couple of overs. With the partnership was going good, the game was just looking in balance, Mishra caught Russell himself off last ball off his spell. Then Chris Morris sealed the game in Daredevils favour in 18th over when he got the price wicket of Robin Uthappa caught at point.