South Africa slipped to a second consecutive defeat in the ongoing T20 Tri-Series in Harare. Today, the Proteas were humbled by the Tigers by three wickets in the 5th match at the Harare Sports Club.

South Africa slipped to a second consecutive defeat in the ongoing T20 Tri-Series in Harare. Today, the Proteas were humbled by the Tigers by three wickets in the 5th match at the Harare Sports Club. With Bangladesh picking up their second win of the unofficial tournament, the two slots for the Final on the 24th of this month are wide open.

South Africa batted first after winning the toss and found themselves pegged back at 34 for 3 by the 7th over. The Proteas somehow scratched around to put up 129 for 7. Justin Ontong, who came in at no.4 was the top scorer with 41 from 36 balls (with 2 fours and a six). Abdur Razzak was the pick of the bowlers for the Tigers conceding only 17 runs off his 4 overs. Another left arm spinner Elias Sunny also did a great job taking 2 for 22 in his 4 overs. 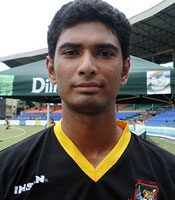 Bangladesh in their run chase stuttered at 64 for 4 by the 9th over. However, a crucial stand of 40 between Mahmudullah (28 from 27 balls with 2 fours) and Ziaur Rahman (27* from 26 balls with 4 fours) sealed the match. Before these two got together, former Skipper Mohammad Ashraful, who opened the innings, scored an important knock of 40 from 40 balls with 6 fours before getting dismissed in the 13th over with his side at 84 for 5.

The Proteas bowling fought hard to defend the total of 129 but in vain. The Bangladeshis chased down the target with just a ball to spare. Fast bowler Marchant de Lange with 3/25 in 3 overs and Wayne Parnell with 2 for 18 in 4 overs provided the Proteas with hope. The Player of the Match award was given to Mahmudullah for his 1 for 18 (3 overs) and 28.