We have a bowling attack as good as any team in world cricket: Steve Waugh challenges Team India 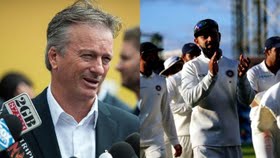 Waugh added that Shastri's comments would only put added pressure on the Indian side. "I am not really sure but probably not a great thing to say as it puts extra pressure on the team. Once they start losing, they will get a lot of criticism for that. Look, it's good that Ravi Shastri believes in his side but comments like these could be kept to himself," Waugh said.The former captain went to the extent of saying that in spite of all the recent issues the Aussies have been facing they would still be hard to beat at home. "Australia will be hard to beat in Australia. We have a bowling attack as good as any team in world cricket and we can take wickets. It's our batting if we score 350 runs in first innings, I think we will be very hard to beat. And someone will always come and do well and that's the nature of the sport."I am still pretty confident that we can win in Australia but it's going to be a close series though," Waugh added about the Test series.
--By A Cricket Correspondent