Toss: Australia won the toss and chose to bat first

Woah! Pujara is out to open the innings! Rahane in the middle order. What is Dhoni thinking?

Pragyan Ojha gets the final wicket. That's his 100th Test wicket in just his 22nd Test match. Joint 3rd fastest Indian to get there.

India's day despite Australia doing well in the first and the third sessions. The fightback by the tail has given them some hope. They were 136 for 7 in the middle session, that after a cracking start by Hughes. From 106 for 2 to 136 for 7 to 231 for 8 at stumps.

Some smiles finally on the face of the Aussie dressing room. They finish Day 1 on 231/8. India won't be too disappointed though.

India bowled 98 overs in 6 hrs, that's 16 overs 2 balls/hour. India eager to see back of Aussies but Siddle had different plans. 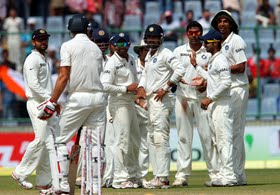 Ashwin taken 25 wickets so far in the series and Jadeja with 19 wickets Top 2 leading wicket takers in the series.

Will Kotla be Sachin's last Test match in India?

India players wait for Mitchell Johnson to leave after he was bowled.

Jadeja has a thing against Aussie captains. Got them 6 out of 7 times this series. 5 out of 6 to Clarke and Watson.

Watson becomes Australia's 44th Test captain after Michael Clarke was ruled out in Delhi with a back injury.

Sachin Tendulkar pips skipper MS Dhoni as most talked about cricketer on social networking sites these days. Vijay, Jadeja come in next.

India vs Australia all set for 4-0? Cricket Fans - enjoy for now...next month you will hear stories about how, too much cricket messed up the IPL