To put it bluntly, South Africa have not had a great time in international cricket recently. They lost the Tests in India rather embarrassingly, and were even undone at home by England in the same format. While those are rather disappointing results

To put it bluntly, South Africa have not had a great time in international cricket recently. They lost the Tests in India rather embarrassingly, and were even undone at home by England in the same format. While those are rather disappointing results, things can get rather jumbled up because of the various formats that teams feature in these days. A closer look actually leads one to the conclusion that South Africa have maintained their impressive record in the shorter formats. They beat India in India, both in ODIs and T20s, and overcome the English challenge at home in the same versions. Managing to come back in the one-dayers after being 0-2 down was a significant achievement.

South Africa's 2-0 triumph over England in the recently concluded T20 series is a massive fillip for them, with the World T20 coming up. Their performance in Johannesburg, in particular, was standout, as they completely demolished the England challenge with both bat and ball. It was the kind of effort the Proteas were desperately seeking after somehow scraping through in the first game, despite chasing only a mediocre total. The smashing effort at Johannesburg only reasserts that South Africa remain among the top contenders for yet another world event though they haven't won any yet. The fact that South Africa achieved success chasing would please them even further.

The manner in which AB de Villiers and Hashim Amla batted in the second T20 augurs well for the Proteas. Both complemented each other superbly, with de Villiers using force and muscle play even as Amla scored equally quickly without hardly breaking a sweat. The well-settled opening combo should carry on into the World T20 as well. The partnership at Johannesburg was actually a roadmap for the path ahead. Amla's struggles now seem a thing of the past, with him constantly getting runs. So good have Amla and de Villiers been at the top of the order, it seems difficult for even the in-form Quinton de Kock to get his eye in, which is a plus for South Africa.

One of the biggest gains for South Africa from the series against England, especially as they build up to the World T20, was discovering the match winner in Chris Morris. The all-rounder has been on the international circuit for a while, but wasn't an automatic pick. In the England series, captains across formats placed their faith in Morris, and the big man delivered the rewards, especially with the bat. He scored runs in the Tests, but more significantly won them close games in the one-dayers and T20s, from positions where the contest could have gone either way. David Wiese also had a decent series. But, the success of Morris has put greater pressure on JP Duminy. 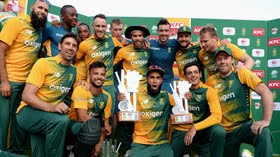 South Africa's pace spearhead Dale Steyn is likely to be fit for the World T20. But, even if he is unavailable, South Africa have done enough to ensure that they have a strong back up in place. Kagiso Rabada has quickly become the leader of the attack across formats. He has found good support in Kyle Abbott, who has troubled batsmen with his pace. The all-rounders in Morris, Duminy and Wiese are giving Faf du Plessis flexible options. Further, leggie Imran Tahir has returned to form against England. South Africa are looking dangerous as another World Cup approaches. It will again come down to performance vs potential.