Afghanistan look to impress against England as well

This tournament is only a few days old, but even in the one game that Afghanistan have been on show, against India, they proved that they are not here just to make up the numbers.

This tournament is only a few days old, but even in the one game that Afghanistan have been on show, against India, they proved that they are not here just to make up the numbers. Had they only fielded better and reined in their indiscipline against the Indians, who knows we may well have had the first major upset of the tournament. After all, the margin of victory for India was merely 23 runs – the result could have been overturned had Afghanistan not conceded the number of wides they did or held only to the chances offered by the Indians.

To be fair to Afghanistan, they shouldn’t be embarrassed at all by their showing in the field. It is a fact that they are still at the nascent stage of their international career, and being so are bound to make the kind of mistakes they committed against the Indians. The good part was that they were confident, and, more significantly, competitive. At the same time, they must try and improve with every passing game. The Afghans would know very well where they faltered against India, and if they show advances in the same area, it would mean that they are a side striving to learn.

In a way, Afghanistan coach, Kabir Khan, has openly challenged England, stating their bowlers struggle in sub-continent conditions. And while there is definitely a lot of truth in the statement, Afghanistan need to be careful not to get into mind games with top teams so soon. While on one hand it does show the confidence the Afghan coach and players have in themselves, it is also a fact they are yet to prove their ability completely at the international level. For a start, they need their bat and ball to do the talking. 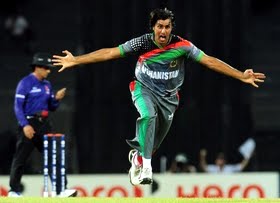 There are a couple of players, who were highly impressive against India, and England, for one, must have taken note of the same. Left-armer Shapoor Zadran not only bowled at genuine pace, even touching 150kph, but also troubled both the Indian openers. The effort against India will have given his confidence a boost for sure. And while England are used to playing pace, the series against South Africa proved that genuine pace can trouble them. Mohammad Nabi also played a wonderfully attacking cameo against the Indians, that can kept Afghanistan in the hunt, albeit briefly.

If Afghanistan put their best foot forward on Friday, Stuart Broad’s men won’t have it easy. They would have to depend on their talented men to take them through. While the bowling line up is pretty much decided, it is their batting that will be put under pressure, especially in the absence of Kevin Pietersen. The top three - Craig Kieswetter, Alex Hales and Luke Wright will have a big job on hands even as Eoin Morgan and Jonny Bairstow would shore up the middle-order. One should also not forget Jos Buttler, whose blast helped England draw the T20 series against South Africa recently.