Hardik Pandya sees himself as a serious finisher

M S Dhoni and Pandya featured in a decent partnership during the match, but neither could take India over the line.

On the partnership, he was quoted as saying in a PTI report, “"The conversation with MS was pretty simple to be honest. The power which we both have we thought to take the innings deep and then chase it down. Most times we would chase 31 off 29 balls but then we were not able to finish. I back myself to finish the game for the team and all these instances are part of the learnings.” 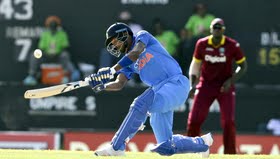 Asked about what approach India would take in the final match, Pandya replied, "We will be fearless in the final game. Last game was one of those games where it did not click. But we will go ahead and express ourselves, that is when we play our best cricket.”

Asked about his angry reaction following his run out in the Champions Trophy final against Pakistan, Pandya explained, "It took a lot of time. Only three minutes to be honest. It was just an outburst. I get hyper quickly and after few minutes I was laughing in the dressing room. Looking at me, some of the players were laughing too."