England sustained its pressure on India right till the end to leave the hosts on the edge at 273 for 7 at Stumps on Day 1 of the Third Test at the Eden Gardens in Kolkata. There is hardly any batting left for India to get to a healthy first innings total although Skipper MS Dhoni has managed to stay unbeaten.

England sustained its pressure on India right till the end to leave the hosts on the edge at 273 for 7 at Stumps on Day 1 of the Third Test at the Eden Gardens in Kolkata. There is hardly any batting left for India to get to a healthy first innings total although Skipper MS Dhoni has managed to stay unbeaten.

The final session saw the promising stand between Sachin Tendulkar and Yuvraj Singh coming to an end in the 69th over. Yuvraj Singh moved to 32 (with 4 fours and a six) before he was caught at covers off Graeme Swann in a backfoot drive to a short ball that had stopped onto the pitch. Yuvraj with Tendulkar had added 79 runs for the 5th wicket while taking India past 200. 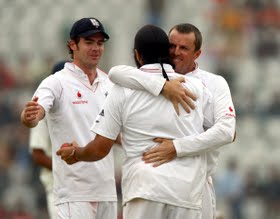 Tendulkar, who was eyeing an elusive Test century after a long time, was dismissed in the very first ball after drinks when he edged a late outswinger from Anderson and was brilliantly caught one handed by Matt Prior. The veteran batsman scored a crucial knock of 76 (in 155 balls with 13 fours) but whether that would be enough for India in this Test match remains to be seen.

The hosts got another promising partnership going towards the end of the day’s play between MS Dhoni and R Ashwin. The duo added 38 runs before Ashwin (21) was bowled by an inswinger from Anderson with the second new ball. The day’s play was certainly won by England as they put India on the mat on a decent batting track. James Anderson bowled beautifully reversing the old ball to come up with figures of 21-5-68-3. Monty Panesar kept one end tight bowling 12 maidens in his 35 overs and giving away only 74 runs besides a couple of key wickets.

Tea Report: England bowlers came up with a superb show in the afternoon session to grab the initiative in the Kolkata Test. India lost two wickets in the session but are back in a decent position by Tea thanks to a fighting knock from Sachin Tendulkar. At Tea, England are holding the edge with India at 172 for 4 in 58 overs.

The first breakthrough of the afternoon for England came when a well set Gautam Gambhir was nicely snapped up at slip by Trott in an attempted cut shot to a straighter one from Monty Panesar which kicked up to take a top edge. Gambhir departed with a personal score of 60 from 124 balls (with a dozen fours) and India at 117 for 3 in the 42nd over. England was right on top when James Anderson using the reverse swing and the extra bounce got Virat Kohli edging him low into the hands of Swann at second slip to leave the hosts at 136 for 4.
It was a poor position for India when Yuvraj Singh walked in to join Tendulkar. Yuvraj was lucky to have survived two lbw appeals; one of them should have been given out in the bowling of Anderson. The left-hander survived quite a few close calls against the pacers to remain unbeaten on 14* by Tea. Sachin Tendulkar at the other end has quietly collected 46* (from 98 balls with 8 fours). The little master looks very determined to come up with a big contribution against some top class bowling efforts from the Englishmen.
Lunch Report: It was mixed fortunes for both the sides in the morning session with India collecting 90 runs in 29 overs while England got two wickets – Sehwag and Pujara.

On what was a nice batting track, India got off to a sound start of 47 in 10 overs before Virender Sehwag (23) was tragically run out in an attempted third run. Sehwag was going for a third run but his partner Gambhir wasn’t interested and couldn’t come up with proper communication. India settled down after the mix up but out of nowhere lost its second wicket in the form of Pujara just about 15 minutes to go before lunch.

Cheteshwar Pujara (16) was undone by an arm ball from Monty Panesar to which he lazily went back and got clean bowled around middle after clearly getting beaten by the pace off the track. At Lunch, Gautam Gambhir is on a well made 50* (from 91 balls with 10 fours) along with the under pressure Sachin Tendulkar (1*) who looks promising with the way he has stretched out to Panesar.

Toss and Teams: India has won the toss and elected to bat first in the Third Test at Kolkata. The hosts have made one change with Ishant Sharma coming in for Harbhajan Singh. England have made two changes with Ian Bell and Steven Finn replacing Jonny Bairstow and Stuart Broad.

Pitch Report: The pitch at the Eden Gardens has been dominating the headlines in the last few days leading to this Test Match. And what we have is a nice batting strip full of runs. It is expected to get slower as the game progress and would possibly take turn from Day 3 onwards. The first hour of every morning will aid the seamers because of the early start. The fast outfield and the flat batting conditions could give us a high scoring match atleast in the first innings.