It was déjà vu as we saw CSK leaving too much to be done in the last 6-7 overs of the match and eventually failing to do so. Kohli played an exemplary innings of 90* as RCB beat CSK by 37 runs to register their biggest win over them.

CSK were chasing 170 and would have backed themselves as the target wasn’t massive and the pitch wasn’t doing much for the bowlers. Their start with the bat was pretty sedate as not much happened in the first 3 overs, with only 13 runs coming off them. Washington Sundar did his powerplay magic again as he got rid of du Plessis. One over later, Sundar would come back to bowl Watson too as CSK found themselves in early trouble.

Jagadeesan, playing his first match, joined Rayudu as only 26 came off the powerplay. With the required rate climbing over 10, CSK’s no urgency approach was baffling yet again. After the strategic timeout, they did show some intent and tried to go for the big shots. However, all Jagadeesan could do was to get his strike rate above 100 before he was run out by Morris. MS Dhoni came to bat and he had no time to have a look with 74 runs still required of 30 balls. He smashed Chahal for a six down the ground, and tried to repeat the feat later in the over, but found Gurkeerat at long off instead. Curran was dismissed for a golden duck by Morris, who was having a fine debut for Bangalore as he returned with figures of 4-0-19-3. Rayudu was bowled by Udana and Bravo, Jadeja got out in 3 balls as CSK faltered in yet another chase. 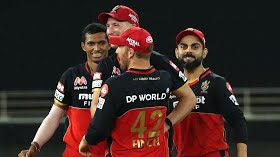 Earlier in the match, RCB had a below average start to their innings as Finch had struggled to get going as he could manage only 2 runs of 9 balls and his misery was ended via an inswinger by Deepak Chahar. Padikkal took time early on and so did Kohli as RCB were scoring at 6 runs per over at the end of powerplay. Though Kohli picked up the scoring rate later, Padikkal struggled to do so and had to follow an all attack approach as there were quality strokemakers waiting in the dugout. That worked out only partially as after a six, he was dismissed by Thakur, who seems to have developed a knack of picking up crucial wickets, as AB would go on to nick one behind two balls later. Sundar too got out after hitting a six off Karn Sharma.

RCB were then in some trouble then, with the score reading 96-4 with only 5 overs to go. However, we were in for a Kohli show as he absorbed all the pressure and led from the front. He got some support from Dube at the other end who was striking it with power. Then came the last three overs which changed the course of the match. Kohli, who got to 6000 runs sometime earlier in this innings, absolutely nailed a couple of sixes off Curran as 24 came off the 18th over. Kohli was severe on Thakur and Bravo as well as 14 runs came off the last two overs each and RCB finished at a comprehensive 169 with skipper Kohli at 90*.