There was a time when Bangladesh were the one team that Zimbabwe could beat consistently. Those days are certainly history now. Bangladesh have held the upper hand over the more experienced minnows for a couple of years now.

There was a time when Bangladesh were the one team that Zimbabwe could beat consistently. Those days are certainly history now. Bangladesh have held the upper hand over the more experienced minnows for a couple of years now. The trend has continued in the ongoing T20 series in Bangladesh. The hosts have been dominant over the course of the first two games, and will be keen to seal the series with a hat-trick of wins in Khulna on Wednesday. It wouldn't be surprising for they have clearly dominated the series. As for Zimbabwe, they must put their best foot forward so as to stay alive in the series.
Bangladesh should be pleased with their batting performance in the previous game as they posted an impressive 167 while losing just three wickets. There were contributions from almost everyone as Soumya Sarkar and Sabbir Rahman made 43 each, the latter remaining unbeaten. Further, the experienced trio of Tamim Iqbal, Mushfiqur Rahim and Shakib Al Hasan all contributed 20s. In the bowling department as well, Bangladesh were excellent all round. Sabbir starred with three scalps and Mustafizur Rahman claimed two. The rest chipped in by being economical. 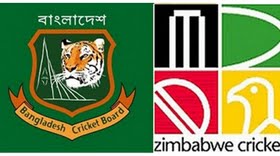 Zimbabwe's batting clearly let them down in the second game. Although 168 was a tough target, it was clearly a gettable one if a couple of batsmen had got their eye in. But, that wasn't the case. Hamilton Masakadza top scored with 30 while Malcolm Waller made a quick 29. At the top of the order, Vusi Sibanda contributed 21, but all the others struggled, and stumbled under the pressure applied by the Bangladesh bowlers. Richmond Mumtumbami and Sean Williams both fell for 7, which put Zimbabwe on the back foot.
Zimbabwe's bowling in the match was also a let down. They managed only three wickets in 20 overs, with Taurai Muzarabani, Wellington Masakadza and Graeme Cremer claiming one each. The others like Brian Vitori and Neville Madziva not only went wicketless, put proved expensive as well. Zimbabwe clearly need to show tremendous improvements in all aspects of their game to claim a victory against the odds in the third match at Khulna.
Bangladesh, on current form, go into Wednesday's match as favourites. But, a couple of changes are likely in the team. Given his poor recent form, Mahmudullah may have to sit out. Also, the injured Mushfiqur Rahim would be replaced by Taskin Ahmed. As for Zimbabwe, they also could ring in changes. Peter Moor and Madziva may make way for Tendai Chisoro and Luke Jongwe. Chamu Chibhabha may also get a look in if one of the batsmen gets dropped.
-- By A Cricket Correspondent