After facing contrasting fortunes in Tests against different opponents, Australia and New Zealand will face each other in yet another edition of the Chappell-Hadlee trophy, with the first ODI beginning in Sydney on Sunday

After facing contrasting fortunes in Tests against different opponents, Australia and New Zealand will face each other in yet another edition of the Chappell-Hadlee trophy, with the first ODI beginning in Sydney on Sunday. The Aussies go into the series having avoided a 3-0 whitewash at home against the South Africans, thanks to their victory in the day-night Test at Adelaide. The Kiwis, on the other hand, notched up an impressive 2-0 in the Tests at home against the struggling Pakistanis. They are also the holders of the trophy, having won the previous edition 2-1, and would be keen to retain the trophy.

Aussies may be the world champions, but they are definitely in struggle mode even in the one-day format. In the previous series against South Africa they were thrashed 5-0 in what was a miserable performance. They will be keen to change their fortunes. In their endeavour, the hosts will welcome back Mitchell Starc and Josh Hazlewood, both of whom had missed the series against South Africa. In their presence, the Aussies will definitely become a more formidable bowling until. Another fast bowler, Pat Cummins is also returning from injury. That should add further potency to the Australian pace attack. 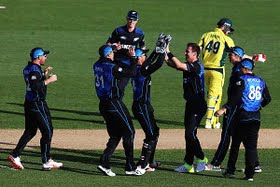 Steven Smith and David Warner may have struggled in Tests of late, but they have been in excellent form in the one-day format, and would be looking to continue their great run. Warner, in fact, was top run-getter even in the 5-0 loss to the Proteas. Smith, on other hand, may not have had a great run in the same series, but he has over 900 runs in ODIs this year, and would be banking on the same. A few other significant names, who missed the South Africa series, will also be returning to bolster the Aussie line up. They include the all-round trio of James Faulkner, Mitchell Marsh and Glenn Maxwell.

Australia and New Zealand met in the World Cup final last year, and Aussies were clearly the superior of the two sides at home. The Kiwis will be looking to change fortunes this time round. In the batting department, Martin Guptill could be the key. The opener may be out of favour in the Tests, but he can be highly dangerous at the top of the order. Tom Latham would be looking to continue his consistent form in international cricket. New Zealand will be without the services of Ross Taylor, who recently returned to form with a hundred, and all-rounder Corey Anderson. As such, skipper Kane Williamson will have a greater role to play.

In the bowling, yet again a lot with depend on the tried and tested duo of Tim Southee and Trent Boult. If the duo shine, the Kiwis would definitely compete well. New Zealand have included Lockie Ferguson in the side. He is a promising fast bowler, who is said to clock over 140kph consistently in domestic cricket. Whether the Kiwis will risk him in the starting eleven remains to be seen. With Adam Milne and Mitchell McClenaghan both unavailable to be injuries, both Colin de Grandhomme and Jimmy Neesham are likely to be included. In the spin department, legspinner Todd Astle is likely to find a place. A 3-0 victory would push New Zealand towards the No.1 ranking, so that is another inspiration.