Ravichandran Ashwin and Ravindra Jadeja once again starred with the ball, claiming eight wickets between them as South Africa were bowled out for a mere 214 on day one.

Ravichandran Ashwin and Ravindra Jadeja once again starred with the ball, claiming eight wickets between them as South Africa were bowled out for a mere 214 on day one. Virat Kohli surprised one and all with his decision to bowl first. Furthermore, India left out AB de Villiers' tormenter at Mohali, Amit Mishra, in favour of Stuart Binny. But, India's bowlers reaffirmed the faith shown in them by Kohli. For the second game in succession, Ashwin and Jadeja combined to torment the South African batsmen. India's openers then featured in a solid opening stand as Murali Vijay continued to look impressive, and Shikhar Dhawan finally got some runs under his belt. India ended the day at a healthy 80 for no loss after 22 overs.

India opened the innings with comeback man Ishant Sharma and Binny, and while there was some early morning assistance from the surface, neither could make much of an impact. It wasn't long before Kohli had to turn to the slow bowlers. And, the Indian skipper wasn't disappointed. Ashwin struck twice in his very first over, the eighth of the innings. He trapped Stiaan van Zyl lbw as the opener played for the turn, and was beaten. Ashwin then consumed Faf du Plessis as the batsman flicked at one cluelessly while on the move, and was held at short leg. At 15 for 2 South Africa were in early trouble. 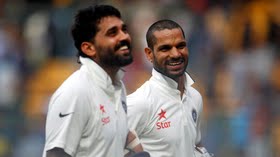 South African skipper Hashim Amla's horror tour continued as Varun Aaron squared him up, and sent his off-stump cartwheeling. In walked de Villiers in his 100th Test. He was given a warm applause by the Bangalore crowd, and the Indians also greeted him with four overthrows. Dean Elgar and de Villiers managed to take the Proteas to lunch without further trouble, but Jadeja struck in the second session to end Elgar's vigil for 38. The opener tried to sweep Jadeja, but only managed to flick one back on to his stumps. Returning from injury, JP Duminy had a forgettable stay at the crease. On 15, he edged Ashwin to slip.

Like at Mohali, de Villiers was the only South African batsman who looked in complete control at the crease. He proved yet again that it is not impossible to score runs on tough Indian surfaces if one applies mind on the job. And he remained positive, even as wickets fell at the other end. De Villiers got boundaries off almost every poor delivery bowled at him. He was desperate for a partner, and finally found one in Dane Vilas. The duo starred in a useful 39-run stand, but just when the Proteas needed the alliance to carry on, Vilas chipped one straight back to Jadeja.

When Vilas was dismissed, de Villiers was on 68. The set batsman then decided to take on the Indians. He roared his way through to 85, before falling at the stroke of tea, unable to keep a defensive stroke down while going down the pitch to Jadeja, Wriddhiman Saha taking a brilliant diving catch. Morne Morkel and Kyle Abbott added 37 for the ninth wicket as South Africa managed to cross 200. It needed a brilliant running catch from Binny to end the alliance. Eventually, South Africa folded up for a disappointing 214, completing a hat-trick of batting flop shows.