Root the glue that holds the team together: Morgan

England eased their way to a eight-wicket win over a lethargic West Indies at Southampton on Friday, continuing to prove that they are one of the teams to beat at this World Cup.

Joe Root was the star with his all-round performance, slamming hundred in the modest chase of 213 after having already sent back Shimron Hetmyer and Jason Holder while bowling. The only cause of worry for England is the injury to their two key players -- Jason Roy and skipper Eoin Morgan himself. 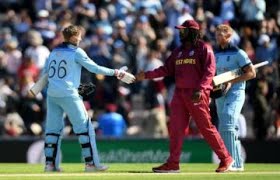 Root opened the innings with the injured Roy unable to do so. He made full use of the opportunity, remaining unbeaten on 100, his 16th ODI ton, as West Indies were all over the place. Speaking about the innings after England's impressive win, Root said, “It is obviously nice to get the century. It was a very good toss to win for us and it was important to take advantage of that."

He added, “You pride yourself as a batsman for converting those starts into hundreds. It is just nice to get some time in Powerplay as it’s nice to have the fielders up and find the gap.

Skipper Morgan too praised Root for his efforts. "He is the glue that holds the team together and is an awesome player to watch,” Morgan said.

On his owing condition, he stated, “It’s sore. I’ve had back spasms before. We think it is another back spasm. It normally takes a few days to settle down."

Roy too isn't in the best of fitness. Shedding light on the opener's condition, Morgan revealed, “Jason had a tight hamstring, so he will go for a scan tomorrow and probably it will take 48 hours before we have the results and stuff.

“I think when any two players go down, it is a little bit of a worry. We are not at panic stations yet. We will just see how we get on in the next 48 hours and go from there," Morgan went on to say.