Virat Kohli and MS Dhoni batted together for two and a half sessions during the crucial third day’s play to rescue India to 297 for 9. Kohli scored his 3rd Test hundred while Skipper MS Dhoni ran himself out on 99.

Virat Kohli and MS Dhoni batted together for two and a half sessions during the crucial third day’s play to rescue India to 297 for 9. Kohli scored his 3rd Test hundred while Skipper MS Dhoni ran himself out on 99. Though India are just 33 runs behind England’s first innings total, they have certainly squandered the hard work done by the pair of Kohli and Dhoni by losing four wickets in the final session. The Test match is now delicately poised with the first innings totals of both the sides expected to be nearly the same.

It was Graeme Swann who provided the desperate breakthrough that England were looking all day long which came just after the drinks break in the final session. Virat Kohli was given lbw after missing a tossed up delivery from round the sticks which turned in just enough to end his innings. Kohli finished with 103 from 295 balls with 11 fours. His partnership with MS Dhoni lasted nearly 85 overs and was worth 198 runs. 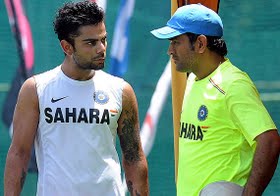 Debutant Ravindra Jadeja failed in his debut innings, lasting 31 balls for his 12 before Anderson’s inswinger skidded through low for an lbw. Towards the end of the day’s play, MS Dhoni who was stuck too long in the 90s ran himself out by attempting a suicidal single from his counterpart Alastair Cook at mid off. Dhoni faced 246 balls to score his 99 (with 8 fours and a six). In the last over of the day’s play Swann came up with a beauty that angled in and spun away to hit the off stump of Piyush Chawla. India closed Day 3 at 297 for 8 having kept England on the field for 130.1 overs.

Tea on Day 3: Virat Kohli and MS Dhoni continued to defy the English bowlers for a second consecutive session to put India back in the contest. Both the batsmen have played their longest knocks of their career so far. At Tea, India have inched to 227 for 4 in 100 overs and cutting down the first innings deficit to 103 runs.

Kohli has batted for 234 balls for his 77* which has come with 8 fours. Dhoni has been slightly quicker, scoring his 75* from 186 balls with 7 fours and a six which was off Swann over long on. The pair had successfully seen through the new ball and now the English bowlers are getting very tired after being on the field for a long time!

Lunch on Day 3: India scored only 59 runs in 32 overs in the morning session but most importantly hasn’t lost a single wicket! The overnight pair of Kohli and Dhoni applied themselves and showed admirable patience to survive the top class English bowling. Kohli has moved onto 46* from 155 balls (with 3 fours) while MS Dhoni is on 31* from 103 balls (with 4 fours). India have avoided the follow on and with a total of 146 for 4 in 73 overs are trailing behind by 184 runs.

Build Up to Day 3: India are in massive trouble at 87 for 4 going into Day 3 with a huge deficit of 243 more runs. It would need atleast two big partnerships for India to get out of jail otherwise England will easily run away with the match. The pitch is upto some tricks now with the cracks opening up and the uneven bounce coming into play frequently.