Struggling teams Kings XI Punjab and Chennai Super Kings will take on each other in match number 18 of IPL 2020 at Dubai, in the second match on Sunday. Both teams have had poor starts to the tournament, winning just one and losing three out of four matches. In their previous encounter against Mumbai, KXIP faltered in the chase of 192 as their batting fell apart. Chennai, on the other hand, failed to overcome Sunrisers Hyderabad despite needing to chase only 165.

Punjab have suffered due to their over-reliance on their openers Mayank Agarwal and KL Rahul. In the last game, both failed and KXIP had to pay a heavy price. Apart from the top two, only Nicholas Pooran has got a few runs. Glenn Maxwell and the rest have been extremely poor, which has hurt the team.

KXIP’s bowling did a reasonable job in the first half against MI, but their death overs performance left much to be desired. James Neesham, in particular, was taken apart in brutal fashion. Sheldon Cottrell came back exceedingly well after the horror against Rajasthan, but Krishnappa Gowtham suffered as he had to bowl the 20th over. 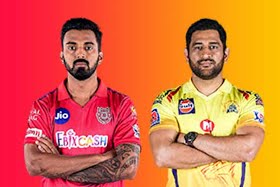 The manner in which they are struggling, Chennai clearly seem to be missing Suresh Raina in the batting order. Senior opener Shane Watson has not been able to get away at all while Kedar Jadhav and skipper MS Dhoni have failed to get going as well. Faf du Plessis has been the only consistent force for CSK. They would hope the recent return of Ambati Rayudu and Dwayne Bravo from injuries would change their luck.

Head-to-Head: The sides have faced each other 21 times in the IPL, with CSK winning 21 and KXIP 9.

Run scoring has not been easy in Dubai, but those who have got in have been able to dominate. There is enough purchase for spin bowlers.

The temperature in Dubai will around 33-34 degrees Celsius in the evening.